The New York-based reggae collective Easy Star All-Stars have carved out a niche for themselves as talented interpreters of other people's songs. Their best-known releases have been re-workings of canonical rock albums such as Pink Floyd's The Dark Side of the Moon and Radiohead's OK Computer. As such, it's easy to mistake them for a novelty act, but they're better than that. Their take on OK Computer (entitled, inevitably, Radiodread) brought out another side in a set of songs which, in their original form, exuded pre-Millennial dread, anxiety, depression and stress. It re-imagined those songs as looser, more relaxed entities; not carefree exactly, but more at ease in their own skins (and, for that matter, with their own skins). It did this without ever sounding overly contrived or silly, which speaks volumes for the group's nous and technical ability. Personally, I'd take their loping version of 'Let Down' over the Oxford band's original. Sure, their take on Sgt. Pepper's Lonely Hearts Club Band wasn't quite as impressive or ambitious as their previous work; for the first time they were working with material which often sounded cheerful and straightforward, and they struggled to add their own imprint to it. Nevertheless, prior to the release of this album of original material, the All-Stars had an impressive track record. 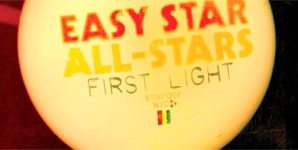 Easy Star All-Stars, Dubber Side of The Moon Album Review

By Scott Causer in Music Reviews on 05 October 2010

Back in 2003 the house band at Easy Star Records recorded a reggae tribute to The Dark Side of The Moon renaming it the Dub Side of The Moon. The album has since gone on too near mythical status spending a total of 7 years on the Billboard chart with the band in constant demand, touring worldwide. The Easy Star All Stars and their rotating cast of members also went on to record reggae versions of Radiohead's OK Computer (Radiodread) and Sgt Pepper's Lonely Hearts Club Band (Easy Star's Lonely Hearts Dub Band). 2010 sees the Dub Side of the Moon revisited by a select number of well-respected, legendary producers such as Adrian Sherwood, Dreadzone, Mad Professor and renamed The Dubber Side of The Moon.