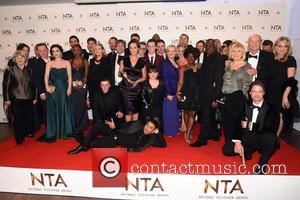 Downton Abbey and U.K. soap Eastenders were named the best of the best at Britain's National Television Awards (Ntas) on Wednesday (21Jan15).

Other winners included Ant MCPartlin and Declan Donnelly, who picked up their 14th consecutive trophy for Entertainment Presenter, while their show I'm a Celebrity... Get Me Out Of Here! was named best Entertainment Programme.

Actress Sheridan Smith earned the Drama Performance prize for her portrayal of singer/Tv personality Cilla Black in the mini-series Cilla, but she was forced to accept her trophy late after failing to arrive at the ceremony on time.

When she finally took the stage, Smith explained, "I couldn't believe it. I was crying in the back of the car. I've been filming since five this morning... There's traffic everywhere. I was in the (taxi) cab for three hours. They said my name and I was in the cab in traffic and I started crying."

Coronation Street actor William Roache paid a special tribute to actress Anne Kirkbride, his onscreen wife of over 40 years, who passed away on Monday (19Jan15).

In a taped segment, Roache gushed over his beloved friend, and said, "What we'll remember the most is the vibrant, warm-hearted, loving person who came to work each day, gave us all a hug and brightened up our lives... I feel blessed and honoured and privileged to have had those years working with Anne.

"We've been deeply touched by the outpouring of love for Anne. We share your grief for losing such a beautiful person. I love you Anne."

Still reeling from the shock of Kirkbride's death, the Coronation Street stars chose not to walk the red carpet at the Ntas, but host Dermot O'Leary thanked them for coming, stating, "I know you've been through a very difficult time and on behalf of everyone here we are delighted you came. We're all here for you."

Meanwhile, the cast of Bbc drama EastEnders dedicated its Best Serial honour to the rival show's fallen star, with actor Ian Woodyatt telling the audience at London's O2 Arena that his drama would not have been possible if it wasn't for Coronation Street.

He left the stage to a standing ovation from the Coronation Street cast when he said, "If you don't mind, we'd like to accept this for the Weatherfield One," referring to Kirkbride.