The Rock deserves a 'ton of credit' for his films

DWAYNE 'THE ROCK' JOHNSON deserves a ''ton of credit'' for his films and should make a movie with fellow WWE Superstar CM Punk, according to Paul Heyman. 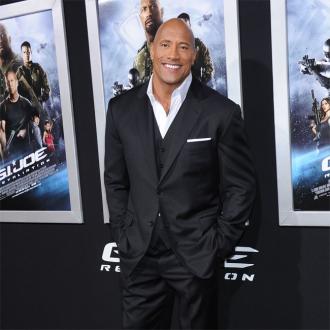 DWAYNE 'THE ROCK' JOHNSON deserves a ''ton of credit'' for his movie career, according to WWE star Paul Heyman.

The wrestling manager believes the Hollywood action man - who is also a part-time WWE Superstar - is a great actor and regularly outshines his co-stars in his movies and deserves huge praise for his performances in films such as 'G.I. Joe: Retaliation', in which he appears with Bruce Willis, and 'Fast & Furious 6', which also features Vin Diesel.

When asked what he thought of The Rock's movies, Paul cheekily said: ''I think The Rock deserves a ton of credit for carrying all of these movies with guys like Bruce Willis or Vin Diesel.''

However, Heyman believes The Rock needs to make a movie with fellow WWE Superstar CM Punk - who Heyman manages on weekly television show 'RAW' - so he can have someone who can match him in front of the cameras.

The 47-year-old wrestling veteran thinks if the two grapplers - who competed against each other for the WWE Title earlier this year - did share a screen they could create box office gold.

Speaking to BANG Showbiz, Heyman said: ''I think The Rock would drop down to his knees and thank the Gods and the heavens if he were to have as compelling a co-star as CM Punk. If The Rock ever had a chance to play off a true performer like CM Punk the global box office returns would be astronomical!''

CM Punk - who will be wrestling this Sunday (14.06.13) as part of 'WWE Payback', which can be seen live on Sky Box Office at 1am - will soon feature in a film, a new 'Flintstones' animation.

He will voice the character of CM Punkrock, based on himself, in the upcoming Warner Bros. and WWE Studios co-production scheduled for release in early 2015.

As well as having iconic cavemen characters Fred Flintstone and Barney Rubble in the movie, it will also feature John Cena as John Cenastone and World Wrestling Entertainment Chairman Vince Mcmahon lending his voice to Vince McMagma.