Dwayne 'The Rock' Johnson Is On A Roll With 'San Andreas'

DWAYNE 'THE ROCK' JOHNSON has been on fire this summer, with multiple box-office smash-hits and a Guinness World Record - where can it go from here?

Dwayne Johnson has already conquered the 2015 box office with 'Furious 7', and now his next huge blockbuster 'San Andreas' is rumbling into cinemas. He also just set a Guinness World Record by taking 105 selfies in three minutes at the film's premiere. Clearly life is good for the 6-foot-4 former wrestler, who at 43 shows no sign of slowing down. 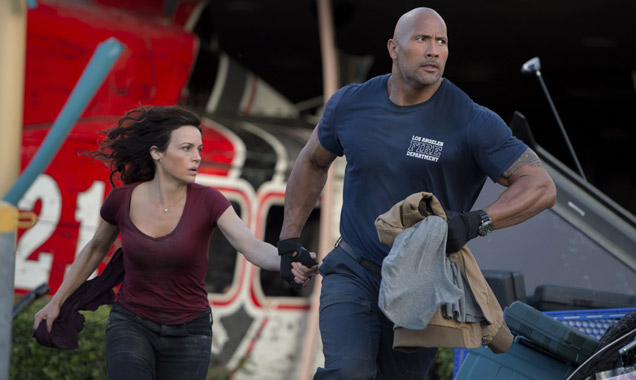 Johnson enjoyed the challenge of making 'San Andreas'. "It's been a long time since there had been an earthquake movie - 1972 was the last Earthquake movie," he says. "There's an expectation, so we want to meet that expectation in terms of heroic characters across the board, all of them having the core of heart. But we also wanted to exceed the expectations too."

Johnson describes his character, a Fire & Rescue helicopter pilot, as "a man who saves lives for living, but yet he can't save his daughter's life. So between the spectacle, the balance of that and family, I may or may not have shed a little tear. Yes, real men cry. Real men cry!"

He sees this film as part of the tradition of summer movie escapism. "When we went into a movie like this, we started chopping things up and said, 'Wow, this feels like a Spielberg movie.' Then we just had this private conversation about how much Spielberg had inspired us. We didn't write him or call him or anything like that. We're just such big fans of his movies."

And Johnson has a lot more in the pipeline, with another 'Fast & Furious' movie already in pre-production, as well as the next 'Journey' adventure, 'From the Earth to the Moon'. He's also about to enter superhero territory in 'Shazam!', the DC Comics action blockbuster for which he was given the choice to play either the title hero or the nemesis Black Adam. Johnson chose the villain, arguing that the character is "inherently more interesting".