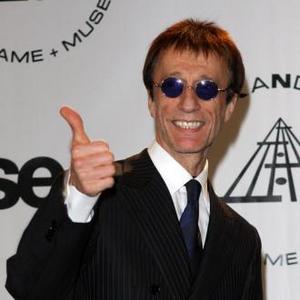 Pop stars, politicians and public figures have all offered their condolences after the Bee Gees star passed away last night (20.05.12) after losing his battle with colon and liver cancer at the age of 62.

Mr. Blair said: ''Robin was not only an exceptional and extraordinary musician and songwriter, he was a highly intelligent, interested and committed human being.

''He was a great friend with a wonderful open and fertile mind and a student of history and politics. I will miss him very much. My thoughts and prayers are with [his wife] Dwina and all the family.''

Robin was in the Bee Gees with his twin brother Maurice - who died in 2003 aged 53 - and their elder brother Barry, 65, who was among those to keep a vigil by his bedside in the weeks before his death. The star's family have asked for privacy so they can grieve.

Duran Duran posted: ''Sorry to hear about the passing of Robin Gibb of the Bee Gees. Our condolences to his friends and family.''

Scissor Sisters frontman Jake Shears also left a heartfelt message, writing: ''Robin Gibb. You are and forever will be a massive influence and inspiration. Rest in Peace.''

Meanwhile, Vince Melouney, who played guitar for the Bee Gees for two years in the 1960s has fondly remembered Robin's wonderful sense of humour.

He told the Today programme on UK station BBC Radio 4: ''Robin was a wonderful fellow, really warm, a lovely man and he really had wonderful sense of humour. He will be sadly missed.''

Speaking of the Bee Gees, he added: ''They had it in their blood from the word go.

''They would pick a guitar up in the morning and they would sing all day. They were on it all the time, they loved it, it just flowed like natural for them.''