The film failed to make enough of an impact upon its release in 2016.

Adapting the hugely popular video game 'World of Warcraft' for the big screen was never going to be an easy task. Announced a full decade before it did eventually make its way to cinemas, there was a lot of talk surrounding just how closely the story and characters of the original game would be followed, and the film's director Duncan Jones looked to immediately be facing an uphill battle.

Travis Fimmel in the 'Warcraft' movie

Though 'Warcraft' was set to be a joint project from Legendary Pictures and Blizzard Entertainment, Legendary's movement to Universal Pictures from Warner Bros., after they were bought out by Wanda Group, left what Jones describes as a "very messy political situation" behind-the-scenes. This all happened whilst 'Warcraft' was in the middle of being made, leaving those working on the film a little scattered.

By Stephanie Chase in Lifestyle / Showbiz on 30 July 2016

Jones and his wife Rodene Ronquillo announced they were expecting a month after Bowie’s death on January 10.

Duncan Jones has welcomed his first son, exactly six months after his father David Bowie’s death from cancer. Jones and his wife Rodene Ronquillo welcomed Stenton David Jones on July 10, saying that his grandfather had ‘made room for him’.

Stenton David Jones. Born July 10th, exactly six months after his grandad made room for him.

Movies based on video games have had a rough run.

Aside from rare hits like Wreck-It Ralph and long-running series like Resident Evil, the list of bombs is a long one, stretching from Super Mario Bros. to Final Fantasy, Prince of Persia and Pixels.

So it was only a matter of time that one of the most popular games of all time, World of Warcraft, would make it to the big screen. And with his film Warcraft, filmmaker Duncan Jones was determined to make a movie that would catch fans' attention.

Based on the iconic strategy game, this fantasy battle epic will appeal mainly to either the gamers themselves or audiences that love wildly detailed fantasy worlds. Everyone else will probably feel a bit lost when faced with the stream of confusing names, spells and magical phenomena that fill every scene. It looks terrific, and is directed with plenty of energy and personality. But it feels both overcrowded and superficial. 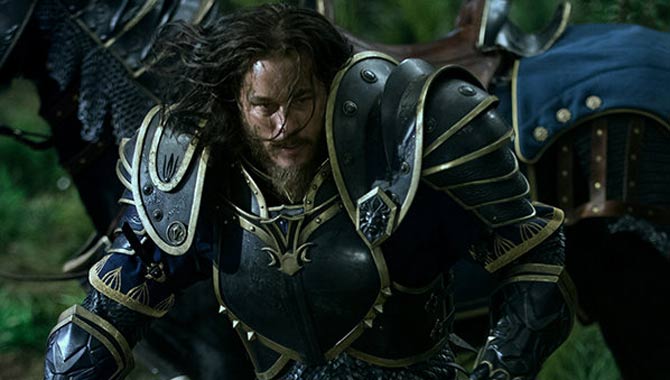 With their home world Draenor dying, the orcs need to travel through a portal to the human realm Azeroth to find more life force to steal. One orc chieftan, Durotan (Toby Kebbell), is having doubts about this murderous plan, and thinks peace with humans might be a better option. His rival chief Blackhand (Clancy Brown) and the cackling orc shaman Gul-dan (Daniel Wu) disagree, and set a massacre in motion. Preparing for the attack, human King Llane (Dominic Cooper) turns for help to his top knight Lothar (Travis Fimmel), sorcerer Medivh (Ben Foster) and apprentice wizard Khadgar (Ben Schnetzer). Then they meet outcast half-caste Garona (Paula Patton), and she offers another way to take on the invaders.

For the uninitiated, the elaborate mythology is so detailed that it blurs together into something rather incomprehensible. Director Duncan Jones doesn't have time to explain everything, so he charges ahead and just lets the dialogue overflow with references that may or may not be needed to work out what's happening. The film leaps from one strikingly staged battle to another, all cleverly designed to mix digital animation with gothic costumes. It looks pretty amazing in 3D, but the only characters who emerge with any depth are Durotan and Garona, nicely played by Kebbell and Patton under mounds of effects, makeup, fur and teeth.

The director said he showed his father an early cut of the film before his passing in January.

Warcraft director Duncan Jones has recalled showing his father an early cut of the epic fantasy movie before his untimely death in January. Jones said his father was ‘excited’ for him about the film and was happy he was doing the things he enjoyed in life.

Speaking to The Daily Beast Jones said: “I showed him an early cut of this and showed him some of the effects shots. You know, for everyone else he was one person. For me, he was my dad. And he was always interested in things I was working on."

War is coming. At least, that's what the first teaser for the upcoming 'Warcraft' film would have us believe. Don't get too excited though; this new trailer for the live-action epic gives virtually nothing away and is pretty much over in the blink of an eye. The war is on! Humans and orcs battle in Azeroth

Never fear, though, because you won't have long to wait for the real trailer as it is set to arrive on Friday in all its glory (November 6th 2015). So far, all we know is that the film involves some long-haired, sword-wielding warriors riding giant eagles across sprawling, majestic seaside kingdoms, while being attacked by enormous, man-eating wolves in poor weather conditions and somehow finding themselves in possession of rather anachronistic weaponry. All of this you could've guessed if you are fan of the online role-playing game 'World Of Warcraft'.

Continue reading: Warcraft Is Coming: A Brief Snippet Of The Humans Vs Orcs Epic Is Unveiled [Footage]

Warcraft: The Beginning is a live action film released in 3-D by Universal & Legendary Pictures.

The full trailer will launch November 6 2015

The WoW big screen adaption is set to be titled Warcraft, and should be out in 2015

After years of speculation, it looks as though a World of Warcraft film will finally be made, with the MMORPG adaption set to begin filming in 2014. Moon director Duncan Jones is still attached to direct, and given the announcement we presume a script has all but been finished and the cast and crew are being put together as you read this.

Atlas Entertainment producer Charles Roven, who is one of the men behind the film adaption, was speaking with SlashFilm last week when the Warcraft project was brought up, with the producer responding positively to the idea that the film will go ahead as planned. He said, without trying to give too much away, "we're moving forward; obviously Legendary is making that film and I'm having a great time with Duncan."

Director Duncan was given the job in January this year, but there was still speculation over whether the film would happen as the team behind the movie adaption have been quiet about it's progress until now. Roven went on to say "First quarter 2014 we're going to shoot that movie," which gives a good indication that the film will be out in time to meet it's planned 2015 release date.

Continue reading: The World Of Warcraft Movie Is Set To Begin Filming Next Year

There is a dangerous subsection of film fans. Not dangerous to society, no, dangerous to film production companies. They're the geeks. They know what they like, they know about it more than anyone else, and more importantly: they care.

So when video games franchises - the staple diet of 'the geek' - are announced to be film titles, an enormous risk is taken. Famously, videogame films are pretty bad. We're not talking things like Wreck it Ralph; that was about videogames, not based on one. No, we're talking Tomb Raider, Resident Evil and Street Fighter. In fact, the best videogame film is Final Fantasy: The Spirits Within, according to Rotten Tomatoes anyway, and their score for it was only 43%.

Game creators Blizzard Entertainment confirmed the news on WoW's official Facebook page, which read: "We are pleased to announce that Duncan Jones, director of critically-acclaimed films Source Code and Moon, has signed to direct the upcoming live-action film based on the Warcraft universe."

World Of Warcraft Movie Director Announced: Duncan Jones Has A Difficult Job Ahead

The World of Warcraft film has been on the lips of gamers for a while now. It was on their lips before it was even announced, and now it has a director: British filmmaker Duncan Jones.

A statement on the Warcraft Facebook page said: "We are pleased to announce that Duncan Jones, director of critically-acclaimed films Source Code and Moon, has signed to direct the upcoming live-action film based on the Warcraft universe." Given that the game has 10 million subscribers globally - making it the biggest world's biggest MMORPG, or massively multiplayer online role-playing game in the world, the film will have a huge stock audience, with numbers growing as talk heightens towards release. Jones - son of David Bowie - confirmed the news on his Twitter feed, posting: "So the gauntlet was thrown down ages ago: Can you make a proper move of a video game. I've always said its possible. Got to DO it now!"

Charles Leavitt, who was behind the 2006 thriller Blood Diamond will pen the script, which is due to start production in 2013 and hit theatres in 2015. Both have a giant task on their hands, as World of Warcraft fans know videogames, and they know fantasy cinema, and won't take a blip on their beloved franchise lightly.