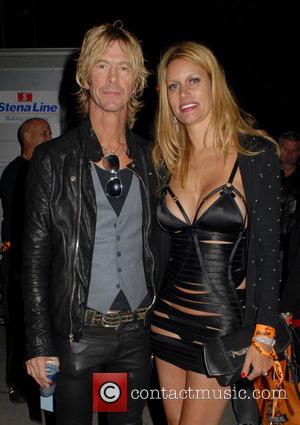 MCKagan hinted at a reunion with singer Axl Rose in a tweet on Monday (31Mar14), but many thought it was just an early April Fools' Day (01Apr) prank.

Now, Guns N' Roses' current bassist has revealed the Velvet Revolver star really will be back onstage with his former frontman for five shows while Stinson takes time off to tour with his reunited band The Replacements.

Stinson will kick off the South American tour with two dates in Brazil this week (ends04Apr14) and MCKagan will step in when Guns N' Roses play in Buenos Aires, Argentina, this weekend (06Apr14). Stinson will return to the line-up in May (14).

He tells Billboard.com, "I had those Replacement shows come up the same time the (South American) tour came up, and it got to be a scheduling issue right out of the gate.

"I didn't want to f**k anyone up in Guns by saying, 'Hey, I can't do this tour,' or anything like that. Luckily someone was able to reach out to Duff and he was amenable to the idea and was into doing it. It's Duff being the kind of good sport he is, trying to help Axl out.

"I don't know that Duff and Axl ever even had bad blood. I don't really know the whole story. But he came up and played with us a couple years back, and they got along great. Whatever their history is, they're certainly fine now."

MCKagan says, "It's pretty great to play these songs again, and looking forward to playing some gigs with my pal again. South America is always a radical place for rock 'n' roll... and I'm honoured to be doing this thing, in that place."

The bassist was a member of Guns N' Roses from 1985-1993. He rejoined the group for a trio of tracks at a London show on 14 October, 2010 and again the following December, when his band Loaded opened for Rose's group in America.

MCKagan was also inducted into the Rock and Roll Hall of Fame as a member of the band in 2012.