Former GUNS N' ROSES Star Duff Mckagan Hopes His Teenage Daughters Will Use His Bad Example And Stay Away From Drugs. 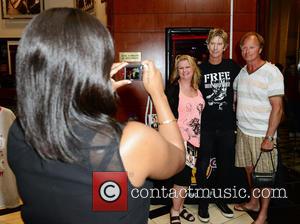 Picture: Duff McKagan - Guns N' Roses basssist Duff McKagan signs copies of his new book 'How to Be a Man (And Other Illusions)' at the...

The rocker admits he's opened up about his heavy drinking and drug abuse past, which led to acute alcohol-induced pancreatitis in the mid 1990s, to daughters Grace, 17, and Mae, 14, but he finds it hard to tell them to "just say no" to drugs.

"Just me saying, 'Just say no', that's not gonna happen; that's like unicorns with horns. So, I mean, I'm honest: 'You might try some drugs. And you might actually like something. Here's the deal, though, I was your age, and that's when I was doing that. And I chased that first good high for 13 years until my pancreas blew up. So you might have that same thing, and it's not cool. So just watch it'."

Meanwhile, promoting his new book How to Be a Man (and Other Illusions), the bassist tells Billboard.com his past drug troubles have left him with a series of health problems, adding, "Because of past drug use I have a lower tolerance for germs that are on planes and that kind of stuff... I got pneumonia. I got back home, and I let my 14-year-old daughter sort of take care of me for the first time in my life."