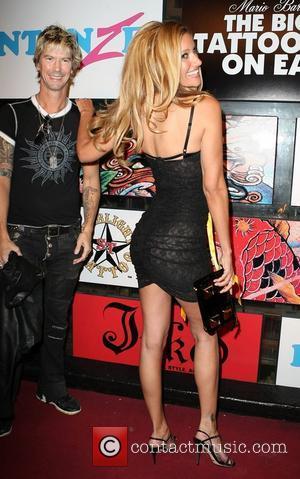 Reformed rocker Duff Mckagan has taken aim at critics of tragic singer Amy Winehouse, insisting "no one loves to be addicted" to drugs.
The Rehab hitmaker, who battled drink and drug demons for years, was found dead at her London home last weekend (23Jul11). A post-mortem examination on Monday (25Jul11) failed to establish a cause of death.
Her sad passing has dominated headlines across the world, but some TV commentators and columnists have used the opportunity to blame Winehouse herself for her troubled personal life, as well as those in her inner circle of "advisors".
But MCKagan, who is now sober after struggling with his own drug issues, is angered by the negative coverage because critics don't understand the real problem with addiction.
And the former Guns N' Roses bassist has lashed out at detractors in his column for the Seattle Weekly newspaper, titled Nobody Chooses Addiction; Not Even Amy Winehouse.
He writes, "Amy lived her life for the last eight years in a fishbowl. We all peered in when she had her great and worldwide success. We all gawked at that same fishbowl as we watched her stumble again and again. Our view into the fishbowl changed as her life's trials changed. But her view Out of the fishbowl never changed. I'm sure it was claustrophobic and terrifying in there.
"For those of you who may say, 'Yeah, but she had Everything! Why would she waste her time on drugs; she should have Just Gotten Sober!', let me just say a few things: no one loves to be addicted; no singer or musician I have ever known has dreamed of one day being successful And strung out. Do you think Amy's success changed Her more, or do you think it is possible that her success changed how other people treated her more?
"The 'specialists' and talking heads on cable news are criticising Amy Winehouse's inner circle of 'advisors'. I know Amy's manager and accountant, and I also know that both of them are Very stand-up people. It is a shame that people like this, people who have tried their best to help Ms. Winehouse in the past few years, get their names dragged through the mud.
"But in the end, it is just so sad to have lost this young woman to what will most likely be discovered to be, drugs. She was a talent. She was different. She railed against the norm. She was a musical trailblazer.
"In the end, I cannot compare what I went through or experienced with what Amy Winehouse went through. I only know that addiction is a lonely and terrifying place to be. It's not glamorous, and addiction does not care if you are well-known and rich, or a loner-hermit with no dough."