Pepsi Teams Up With One Direction For New Ad Campaign

One Direction are the latest stars to link up with Pepsi, as the soft drinks company tries to boost its sales, reports The Herald Standard.

Go way back, and you’ll see Michael Jackson dancing alongside Alfonso Ribeiro (Carlton Banks from Fresh Prince) in an 80’s Pepsi advert. Come forward a bit, and Britney Spears, then the innocent schoolgirl, is selling soda. Now you can look forward to a Pepsi ad featuring British Boy-wonders, One Direction, and NFL star, Drew Brees, in a clip that sees them vie for a can of the fizzy pop. Brees also performs with the group as part of Pepsi's "Live for Now" campaign, which has also featured Nicki Minaj and Katy Perry. Pepsi have also tried to break the sporting market, with ad campaigns featuring the world’s biggest sporting stars, like Lionel Messi and Frank Lampard. In fact, they’ve upped media spending in the United States by more than 40 per cent during the second quarter compared with a year ago, after losing market share to soft drink-giants Coca-Cola Co. in recent years.

One Direction, whilst technically being losers from the X Factor, have become one of the world’s biggest boy bands. Their new album, Take Me Home, will be released on November 13th. Brees is the record-breaking quarterback for the New Orleans Saints.

American football quarterback Drew Brees signs autographs and takes photos with fans outside the venue for 'The Late Show With David Letterman'. He doesn't stop for press photographs but flashes a brief peace sign before getting into his vehicle.

Brees currently plays for the New Orleans Saints in the NFL. The team's management has recently placed a one year franchise tag on his earnings which has impelled him to take them to court arguing that if they do so for 2013, they will owe him a 44% raise. He believes the Saints should have to pay it after being tagged for the third time in his football career
1
Drew Brees 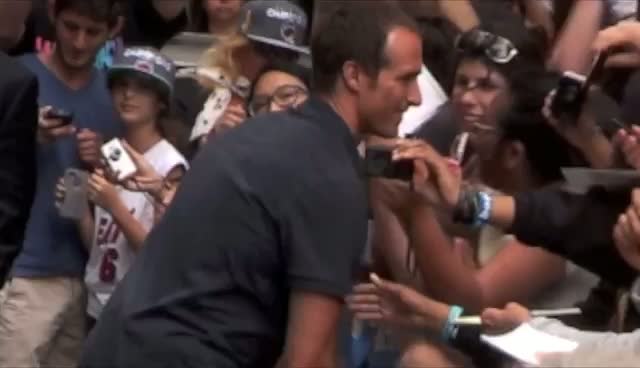