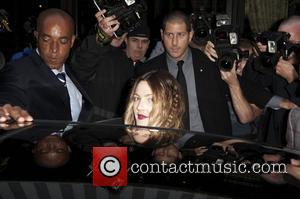 Picture: Drew Barrymore leaving her Central London hotel ahead of the premiere of 'Going The Distance' London, England - 19.08.10

Drew Barrymore has gone public with her new boyfriend WILL KOPELMAN.
DREW BARRYMORE, the American actress who recently split from the actor Justin Long, has stepped out with her new beau WILL KOPELMAN, a Los Angeles art consultant, reports the UK's Daily Mail.Barrymore and Kopelman had lunch in Beverly Hills on Monday (22nd February 2011) and left the Italian restaurant arm-in-arm. The couple were also spotted on a night out at the Music Box venue several weeks ago. Kopelman is the son of the former Chanel CEO ARIE KOPELMAN and was previously in a relationship with the actress Sarah Roemer. A friend of the couple said, "It's a very new relationship and they're taking things slowly ... They've been getting to know each other a lot better these last few weeks". Barrymore was previously married to the Welsh bartender Jeremy Thomas as well as the comedian Tom Green. More recently, she had relationships with The Strokes' drummer Fabrizio Moretti and then the actor JUSTIN LONG, who she starred alongside in the romantic comedy 'Going The Distance'.
DREW BARRYMORE, who now runs her own production company 'Flower Films', got behind the camera last year for the movie 'Whip It'. The film followed the story of an indie-rock loving misfit played by Ellen Page and was warmly received by critics.