Magnesium Light is the first single from Dreamend's new album 'So I Ate Myself, Bite by Bite' which was released in the UK in November through Memphis Industries. Even though the single was officially released in November, the Chicago based band have just released their first video which was directed by David Sowa. It's a typically freaky piece of work from Graveface (see the scary mutant child!) 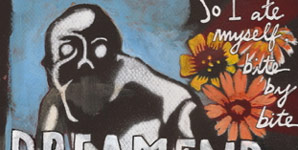 Dreamend - So I Ate Myself, Bite By Bite