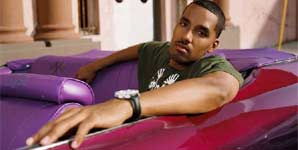 The super producer behind some of hip hop and r&b's biggest hits including "Hate it or Love it" (50 Cent & The Game), "New York" (Ja Rule), and "Say I" (Christina Millian) is set to release his debut album this spring on Jive Records. Check out his new single "Chevy Ridin' High"!

After Dre lent his vocals to guest appearances on various projects including Terror Squad's hit single "Take Me Home," Dre decided to release "Naomi" which is hitting the airwaves, creating a huge buzz and was the most popular song played in the night clubs in Miami during the MTV Video Music Awards weekend.

Miami based super producers Marcello "Cool" Valenzano & Andre "Dre" Lyon and their production company Epidemic Music are embracing the huge success of their latest hits. First they topped the charts with Ja-Rule's "New York," followed by Terror Squad's "Take Me Home." To top off their accomplishments in the music industry, they recently won 3 BMI Top Urban Producers Awards for their #1 hit "Hate It Or Love It" featuring the Game and 50 Cent at the BMI Urban Awards in Miami.

Something From Nothing: The Art Of...