The Kiss bassist had said he was “looking forward to the death of rap.”

The remaining members of group N.W.A. became the newest additions to the Rock and Roll Hall of Fame on Friday night, after being inducted by rapper Kendrick Lamar. The group used their speech to thank their fans and pay tribute to the late Eazy-E, but they also took the opportunity to call out Gene Simmons for his recent comments on rap music. 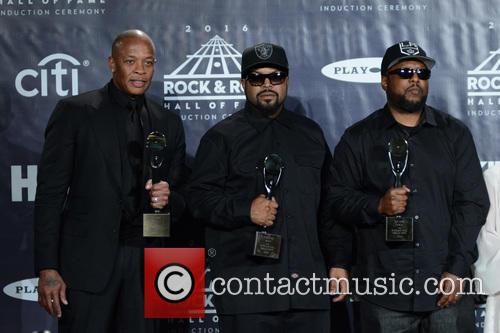 N.W.A. have been inducted into the Rock and Roll Hall of Fame.

During N.W.A.’s induction speech, Mc Ren called out Simmons by name, saying: "And I want to say, to Mr. Gene Simmons, hip-hop is here forever! Get used to it! Get used to it! We supposed to be here!"

“Rock & roll is a spirit…Rock & roll is not conforming. Rock & roll is outside the box. And rock & roll is N.W.A. I want to thank everybody who helped induct us into the Rock & Roll Hall of Fame, and I just want to tell the world, ‘Damn, that shit was dope’.”

During the group’s speech Dr Dre also spoke about the group’s legacy, “It's been 30 years, exactly 30 years, since we formed the group N.W.A,” Dre said. “Back then, we weren't thinking about fame or fortune or anything like that. We were just some kids in the studio having fun recording.”

“But this is proof, this is proof, to all the kids out there, growing up in places like Compton, that anything is possible.” For the group’s induction the remaining four members were joined onstage by Kathie Wright, the mother of founding member Eric "Eazy-E" Wright, who died in 1995.