Review of Compton: A Soundtrack Album by Dr. Dre

The possibility of a new Dr. Dre album seemed more like a dream or a long-running joke than it ever did a reality. With 16 years having passed since the release of 2001, and the anticipation for the long-rumoured Detox reaching unequalled heights before it simply became too long for most people to care. Prior to the release of Compton: A Soundtrack, Dre stated that Detox had been scrapped in favour of this, an album Dre was inspired to make whilst working on the N.W.A. biopic Straight Outta Compton. Being in that kind of mindset and environment bodes well for the album to match up to his previous solo albums, both of which are hugely important to the landscape of hip-hop music today; with The G-Funk sound to The Chronic setting Dre apart from his counterparts of the time, and the masterful production of 2001 that was pushing the levels. 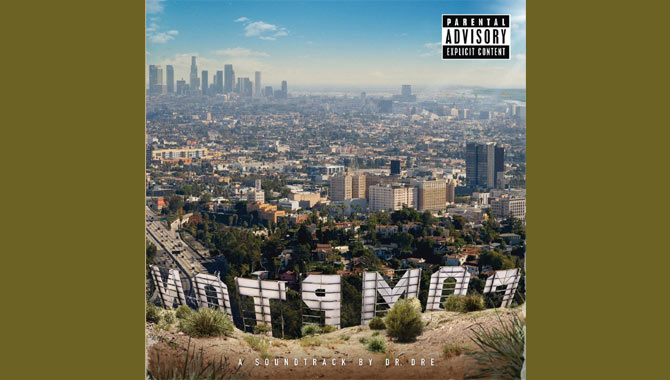 The opening track Talk About It, which features North Carolina MC King Mez and Texas' Justus, feels slightly underwhelming. The verses are cool and all, but it doesn't come with any replay value; the beat is anthemic enough to mark Dre's long awaited return, but the track is lacking that defining Dre characteristic. The following track Genocide definitely does captures that touch though. With an authentic west coast beat produced by Compton producer Dem Jointz, and a savage guest appearance from Kendrick Lamar, this track is an early highlight. It's All On Me, which features BJ The Chicago Kid and Justus on the chorus, is a passionate and soulful cut, with personal lyrics referencing events from early in Dre's career. All In A Day's Work, featuring Oxnard California's Anderson. Paak and Marsha Ambrosius features crisp drums and a great back and forth verse structure from Paak and Dre.

Loose Cannons is my favourite track. With a heavy Dre verse seeing him representing the city he's from, followed by a raw appearance from west coast veteran and Above The Law MC Cold 187um, before an intense and gritty beat change up for Xzibit. It's great to hear X to the Z proving that he's still in possession of one of the most effective flows and distinctive voices in rap. Sly Pyper also drops one of the best 8 bar verses I've ever heard, with a menacing presence and in-the-pocket flow. Ice Cube and Anderson. Paak feature on Issues, and the reunion between Cube and Dre, along with the pounding beat and cocky, west coast themed lyricism (with C-Walk references and WC shoutouts) make the track a memorable one. Deep Water, features another Kendrick appearance, who drops an inflamed and aggressive verse, as well as Justus, whose name is all over this album. The energetic and raw One Shot One Kill, which features Snoop Dogg and present day Aftermath signee Jon Connor (and no Dre vocals), is impressive. Snoop's verse is reminiscent of his style in his heyday, and Connor is a very talented writer. Just Another Day, another track without Dre, follows, and The Game absolutely kills it, with a variety of deliveries and flow patterns, and lyrics that fit the overarching 'Compton' theme of the album perfectly.

The DJ Premier produced Animals, which again features Anderson. Paak is one of the highlights of Compton: A Soundtrack. With a gritty instrumental laced with the signature Premier touch, as well as additional production from Russia's BMB Spacekid and a cutting message to the song, exemplified in the chorus where Paak sings 'And please don't come around these parts, and tell me that we all a bunch of animals/The only time they wanna turn the cameras on, is when we're fucking shit up'. Medicine Man, the penultimate track featuring Eminem, Anderson. Paak and Candice Pillay, has a very polished sound. Em's verse is complex and aggressively delivered, and overall the track is a good one; the 'doctors orders...go fuck yourself' lyric in the chorus grates on me to no end though. The biographical Talking To My Diary is a fitting an moving closer, with classy production choices to boot.

Compton: A Soundtrack isn't perfect. It does lack a certain memorability that his previous albums have, but maybe that'll come with time. Dre is in a different space now; he doesn't have a recognised protege in the form of a Snoop or Eminem figure, the sound of popular hip-hop has evolved a huge amount in the 16 years since the release of 2001, and he's doing remarkably well as a businessman. Dre is definitely still relevant in the music world though; this album might not be cutting through in the same resoundingly identifiable fashion as his previous work, but it shows that Dre's production skill hasn't wained and that his style has evolved and grown with the years. This album is cohesive and polished; there's definitely still room for the old guard in hip-hop today.