Download Festival is now in its 13th year and is continuing to bring us metal behemoths and rock gods from all over the world with Donnington Park once again playing host to the UK's biggest rock festival from Friday 10th - Sunday 12th June.

This year the festival boasts a stellar line-up with Rammstein, Black Sabbath and Iron Maiden all headlining respectively. But that's not all. With Korn, Deftones, Megadeth, Disturbed, Nightwish and many other bands taking to the stages at this year's Download Festival it is set to be a killer weekend.

In light of the unexpected and sad news of the passing of Motorhead's Lemmy earlier this year, the main stage has aptly been renamed The Lemmy Stage. Rammstein return to Download for the second year to headline on the Lemmy stage on the Friday night and many will be expecting an anarchic live performance. The band are due to be preceded by Korn and Killswitch Engage whom will be attracting veteran rock lovers in large crowds.

One surprise act last year that wasn't due to be at the festival, but performed with their buddies Dragonforce anyway will be a little more expected this year. Babymetal, the Japanese force that has slowly taken over the world with their mix of eclectic and thunderous metal and catchy J-pop sounds and has recently been added to the Download line-up.

The second stage, sponsored by Zippo who have partnered the festival for the 6th year running, is playing host to an interesting selection of bands including mainstream pop punk artists Twin Atlantic, as well as having NOFX and Jane's Addiction headlining, alongside other big names. The Zippo Encore stage will be hosting some of the festival's biggest bands alongside the Lemmy Stage. If you're looking for a memento for your time at Download Festival this year, then designing your own Download 2016 Zippo lighter in the Zippo Encore Area or getting hold of one of the limited edition windproof lighters is a way to bring a little something back other than memories.

Breaking Benjamin are a huge band to look out for at this festival. Marking the first time in the history of the band have never performed in the UK before. With a brand new line-up behind lead singer and founding member Benjamin Burley, the band released their new album Dark Before Dawn last year. We expect to hear a good few tracks from this album, along with favourites such as Diary of Jane and Anthem of Angels.

Iron Maiden are midway through their The Book of Souls tour and their stop off at Download Festival this year makes up one of the dates on this monster tour that will see them play in 35 countries. Another one to watch out for on the final night will definitely be Don Broco. A Download preview would not be complete without a mention of the Deftones. Their latest album Gore was an incredible record from the band who have continued to record and perform after the death of their late bassist Chi Cheng in 2013. They are sure to put on a huge and emotional performance on the Lemmy Stage and are looking to blow the festival away before Black Sabbath take to the stage on the Saturday.

Skindred are a band that will be highly anticipated as they are known to put on a huge show no matter how big or small the venue or festival and there is no doubt that they will be the highlights of the festival. Other bands to watch out for that are certain to put on a great show, and will possibly introduce many listeners to a new band that they have never heard before include Tesseract, Frank Carter & The Rattlesnakes, Atreyu, Beartooth and Skillet.

Whether you're looking for hardened rockers or pop-punk bands, this year's Download festival is catering for all music tastes. The likes of Neck Deep and Twin Atlantic are definitely lightening the line-up this year, but with metal veterans Black Sabbath, Iron Maiden and Rammstein headlining the Lemmy Stage over the weekend, we can expect a great show of pyrotechnics and crazy antics. Whatever tastes the festival-goers have, Download 2016 is sure to impress. 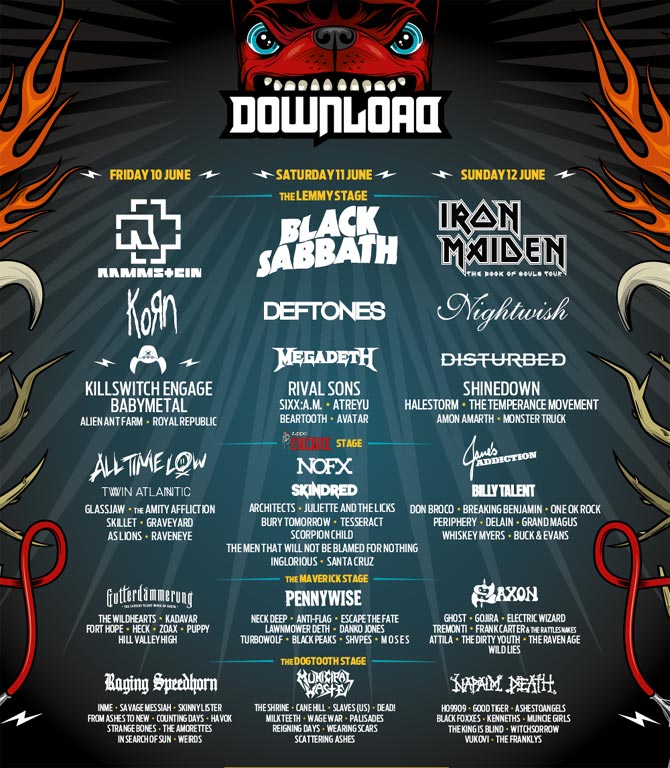