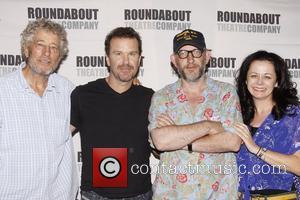 Douglas Hodge won a throng of new fans and even a Tony Award when he was last on Broadway for La Cage Aux Folles and now he is back on the stage taking on the celebrated title role in the latest version of Cyrano de Bergerac to hit New York.

It is the role, created by Edmond Rostand in 1897, that has seen such distinguished actors as Christopher Plummer, Gérard Depardieu (who won an Oscar nomination) and most recently on Broadway Kevin Kline put on the fake nose to take on the role, but this time round the Brit actor his being lamented as being the perfect casting as audiences and critics can’t help but lap on the praise for the actor, who performed the first show of the run only last night (October 11, 2012).

In fact, it isn’t just Hodge that is getting the praise for the show, as his (largely British) co-stars have also impressed all round for their performances. British director Jamie Lloyd takes helm of the new production, whilst fellow Brit Ranjit Bolt has provided a new translation of the timeless production. Kyle Soller, another Brit and French actress Clemence Poesy make up the rest of the top billed cast.