The US comedy series is to be turned into a movie, announces creator Doug Ellin.

The movie adaptation of the comedy-drama series Entourage is all set, two years after the show's eight season run wrapped in 2011. "It's a go. Love you all," the show's creator Doug Ellin captioned a photo of himself posing with members of the show's cast. Doug Ellin Is Ready For An 'Entourage' Movie.

Ellin's sudden announcement follows months of speculation over whether an Entourage movie was in the works and it was rumored that the movie had been delayed by lengthy negotiations with actors.

"I am proud to announce the Entourage movie is officially a GO!," tweeted Jerry Ferrara, who plays accident-prone assistant Turtle, adding via Twitter: "On behalf of the 4 guys I wanna also thank the #entourage fans for the patience. The BOYS are BACK." As a nod to the fans, Ferrara repeated one of the show's catchphrases: "It always works out".

It's a go. love you all. pic.twitter.com/KcIPV5fqR8

Entourage was produced by Ted actor Mark Wahlberg and served as a satire of his own experiences of an actor working his way up in Hollywood. The show documents the experiences of young actor Vincent Chase (Adrian Grenier) on the cusp of fame in Hollywood and stands as an incisive look at the pecking order of the LA film industry. 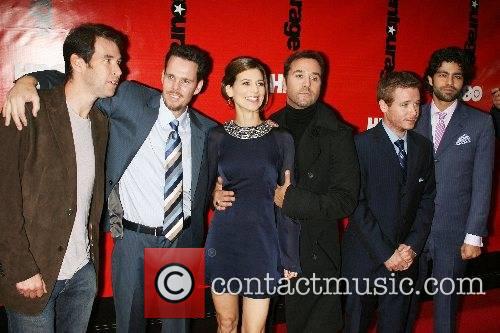 It Is Not Known Who From The Original Cast Has Signed Up For The Movie.

The show ran from 2004-2011 and during that time earned eight Emmy awards, most of which went to Jeremy Piven, who played foul-talent agent Ari Gold and who is reported to have been one of the first to have signed up for the movie reboot.

Filming for the movie is expected to commence next January.