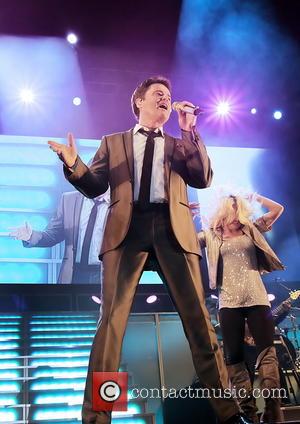 Veteran entertainer Donny Osmond is aiming to return to the Las Vegas stage in September (13) after a torn buttock muscle forced him to sit out a series of joint shows with his sister Marie.

The pop star was performing with his sibling at the Flamingo hotel and casino last month (Jul13) when he leaped on a piano and aggravated an existing injury.

The 55 year old underwent surgery to repair his gluteus maximus, and he has since been resting up while Marie continues to honour their gigs, with their brother Merrill stepping as a temporary replacement.

Osmond has now opened up about the injury in a post on his official website, revealing he is working hard on his recovery and is hoping to be back on stage by September.

He writes, "I recently underwent a fairly routine but a fairly invasive surgery which is requiring a lot of rehab, recovery time and that I stay off my feet. Today, I'm happy to report that I'm doing much better, and will return to Las Vegas on September 3.

"Because of the nature of the injury, there will be some changes made to the show in Vegas. But, if there is one mantra I've lived with throughout my life, it's that 'the show must go on!' And, that's exactly what I'm going to do. And, hey... why not throw in a few new elements to the Donny & Marie Show."