Veteran Singer Donny Osmond Has Thanked Fans For Their Support As He Prepares To Undergo Surgery To Save His Voice. 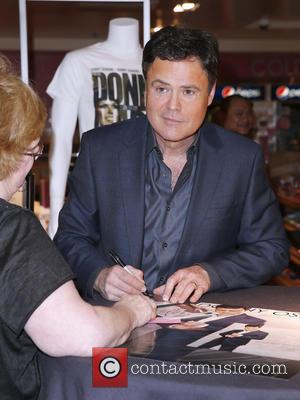 The Puppy Love hitmaker, 57, has been diagnosed with a haemorrhagic polyp on his right vocal cord and is set to undergo treatment with throat specialist to the stars Dr. Steven M. Zeitels, who has previously treated Adele, Sam Smith and John Mayer.

Osmond has now reached out to his supporters to assure them he is in good hands and hopes to be back on stage within weeks of the operation.

In a post on his Facebook.com page, he writes, "I'm sure many of you have heard by now that I'm having surgery on my vocal chord (sic). I want to thank all of those who have left Facebook comments and Tweets with your concerns, thoughts and prayers on my behalf. Rest assured, I'm in very good hands. Dr. Steven Zeitels is considered the best in the world. He's helped artists like Adelle (sic), Sam Smith, Lionel Richie, John Mayer and so many others get back on stage with amazing success. He has assured me that I'll be ready this fall when we start back up in Las Vegas. Thank you once again for your concerns."

Osmond has cancelled a number of shows, but is due back on stage in Sin City in late September (15).