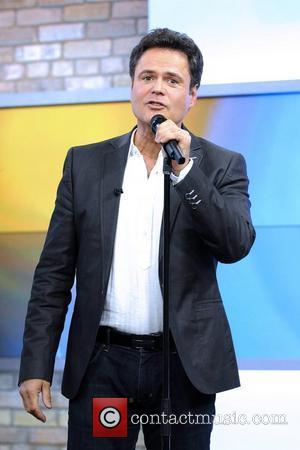 Singer Donny Osmond offered tragic superstar Michael Jackson a safe haven at his home a year before he died after the King of Pop revealed he had hired a motor home and was hiding in Arizona with his three kids.
The Puppy Love star grew close to Jackson when they were both were teen superstars in the 1970s.
He has now opened up about their friendship almost three years after Jackson's 2009 death, and reveals the singer fled to Arizona with his kids to escape the spotlight in 2008.
After receiving a call from Jackson, Osmond urged his friend to stay at his Utah retreat to enjoy a period of "normalcy".
He tells Life After 50 magazine, "We kind of protected our relationship but now that Mike's gone, Dr. Conrad Murray's been convicted and the headlines are over, I feel better about telling some stories, like the last time we talked.
"He called me a year before his passing and when I asked him where he was calling from, he asked me to promise not to tell anyone and told me he had rented a big motor home and had driven to Phoenix, Arizona, with his kids and was in hiding.
"I asked him whom he was hiding from and he said, 'Well, things are hitting the fan and there's so much pressure.'
"I asked him if he would do me a favour, to get in his bus and drive up to Utah where he and his kids could stay with me. Nobody would know and they would have normalcy in their life. He said he was going to take me up on it but he never did."