Donny Osmond Is A Grandfather Again 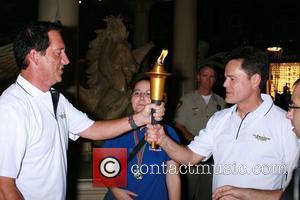 Singer Donny Osmond has become a grandfather for the fourth time.
The Puppy Love hitmaker's son Brandon and his wife Shelby's second child, Tayte, was born on 1 August (12), and the star and his wife Debra headed to Boston, Massachusetts to meet the new arrival.
In a post on his Twitter.com page, Osmond writes, "We had a great time visiting our kids in Boston and meeting our new grand baby."
And opening up about his role as a grandfather during an interview on Britain's The One Show on Thursday (16Aug12), he said, "I guess I'm a fun grandfather, I just act like one of the kids. My wife and I have this funny saying: we've had five children but she's raised six 'cos I act like such a kid around the house.
"It's hard for me to say that I'm a grandpa."
Osmond and his family will soon have another new addition - his son Donny Osmond, Jr. and his wife Jessica Nelson are expecting a baby.