Donny Osmond And Susan Boyle Team Up For Musical Covers 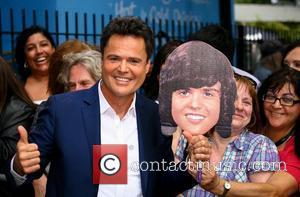 Veteran pop star Donny Osmond has given Scottish sensation Susan Boyle a big boost by joining her for two songs for her new album of theatre musical standards.

The Puppy Love hitmaker reveals he met Boyle while on a promotional tour of the U.K. last summer (11) and they decided to hit the recording studio together to see what they could come up with.

Their covers of All I Ask of You from The Phantom of the Opera and This Is The Moment from Jekyll & Hyde will feature on Standing Ovation: The Greatest Songs From the Stage, which is due for release in November (12).

Announcing the news in a series of Twitter.com posts on Thursday (04Oct12), Osmond writes, "Yes it's true. I'm singing two songs with Susan Boyle on her new album that's coming out very soon. Donny And Susan".

And Boyle reveals she was overjoyed to team up with her childhood pop idol.

Commenting on the duets in a message on her website, she writes, "Who would have thought that I would have been singing a duet with my hero Donny Osmond. I grew up with the Osmonds - especially Donny. I was thrilled... He was awesome."