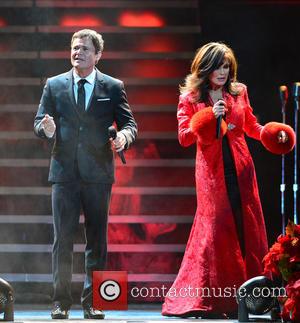 Donny Osmond has offered his support to embattled teenager Justin Bieber, insisting he can appreciate what the young star is going through as he grows up in the spotlight.

Bieber has been making headlines throughout 2013 for a series of gaffes and blunders, ranging from showing up late at concerts to urinating in restaurant mop buckets and tagging walls in Brazil and Australia with graffiti.

He has also found himself in legal trouble following reports of erratic driving and noisy parties at his Calabasas, California home.

Like many people, former child star Osmond has been watching Bieber's antics, and now he is offering the youngster a little advice.

He tells Closer magazine, "I'm just a normal guy, and Donny & Marie (pop duo formed with his sister, Marie Osmond) left me with such a wacky image. Since (hits) Puppy Love and Go Away Little Girl were such big records, I went through a period when I hated it.

"Justin Bieber is feeling the pains of this right now. Everyone thinks he's still the kid who sang Baby, but he's an adult, and he's rebelling to show people he's an adult.

"(My advice is) just let it happen. You can't change history. When you hit it so big at such a young age, time freezes in people's minds. You just have to live with the consequences until enough time goes by - 20 or 30 years, in my case. You get to a time when you end up embracing it."