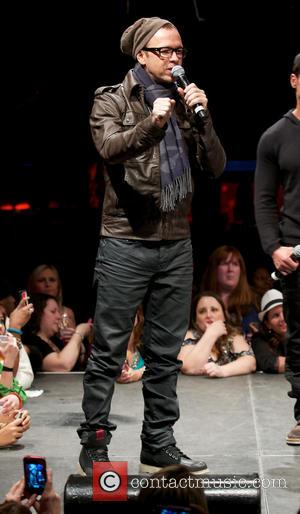 Donnie Wahlberg, Olivia Wilde, Kim Kardashian and Eliza Dushku are among the stars who expressed their relief on Friday night (19Apr13) after a suspect in the Boston Marathon bombings was caught following a massive police manhunt in Massachusetts.

Cops swooped on the Watertown area late on Thursday night (18Apr13) as they attempted to apprehend two brothers wanted in connection with the atrocity at the annual race on Monday (15Apr13), when three people were killed and more than 170 injured after two bombs exploded near the finish line.

Shots were fired in Watertown, and Tamerlan Tsarnaev, one of the two lead suspects, later died from his injuries, while his sibling, Dzhokhar Tsarnaev, evaded capture.

Police embarked on a massive manhunt on Friday, advising people across the city of Boston to stay inside and going door-to-door in the area in a bid to track down the 19 year old, but it was only after the lockdown was lifted at night that one local reported seeing blood near a boat in his backyard - prompting cops to descend on the area and corner Dzhokhar.

The huge scale hunt was documented live on Tv, and celebrities flocked to Twitter.com to heap praise on Boston authorities and express their delight that the suspect had been captured.

Boston native Wahlberg declared, "Time to take our city back. Start the healing process & turn our attention to the victims & their families", while Dushku, who grew up in the town, shared, "Watertown way to stay strong. Breathe & get some sleep now - much gratitude to all the responders. Boston is my blood - peace & love to all."

Wilde wrote, "So goddamn relieved. Boston, I love you. May the bars stay open til dawn", Kardashian offered, "This is insane. I'm glad they finally captured the 2nd suspect!!!", while actor Chris Evans praised authorities: "Great work Boston Pd (Police Department), Fbi, and everyone involved in successfully bringing this chaos to an end. Job well done!!"

New Kids on the Block star Joey MCIntyre, who ran the marathon on Monday, told fans, "Grateful for some kind of relief from this sad week. And for all armed services- heroes all! Thank you Thank You Thank You", while rocker Ryan Adams wrote, "Let the good people of Boston breathe easy tonight. We love you" and Josh Groban tweeted, "So happy that the brave city of Boston can breathe some sigh of relief tonight after being held hostage."

He declared, "Tonight our nation is in debt to the people of Boston and to the people of Massachusetts after a vicious attack on their city. Bostonians responded with resolve and determination. We've closed an important chapter in this tragedy. There are still many unanswered questions. How did young men who grew up and studied here as part of our communities and country resort to such violence? The families of those killed so senselessly deserve answers."