She speaks out against the objectification of women, 'even in the 'locker room''.

Last week, an audio tape emerged from 2005 featuring presidential candidate Donald Trump and Billy Bush having a lewd and disgusting conversation about women; namely Nancy O'Dell and Arianne Zucker. Nancy has now opened up about her feelings on the issue, both in a statement and on her television show. 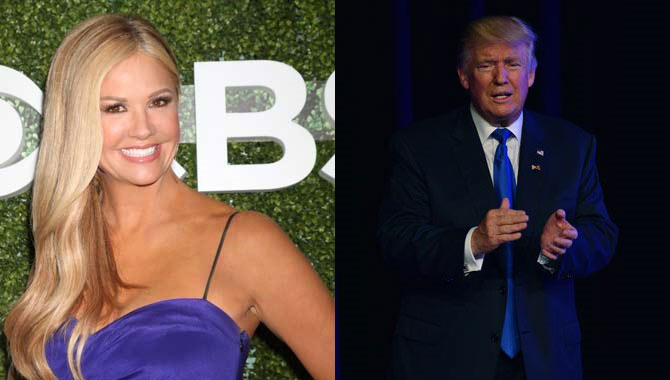 Nancy, who is currently a host on Entertainment Tonight, addressed the situation on the show last night (October 10th 2016), despite having already released an official statement. 'I feel it's very important that I address you all directly', she said. 'I'm sure that most of you have heard the audio tape which became national news and part of the presidential race. My name was mentioned and, unfortunately, the release of it has thrown me into the middle of the political arena of which I didn't ask to be a part.'

'There is no room for objectification of women, or anyone for that matter, not even in the 'locker room'', she continued. 'The conversation has got to change because everybody deserves respect, no matter the gender or setting. And as a mom, I have to add that our kids, especially our young girls, need to know that their hard work, their achievements, their intelligence, their heart are most important, and those things will not go unnoticed.'

For those people who haven't heard the tape recording yet, the conversation went as follows according to a video obtained by the Washington Post. 'You know, I moved on her actually. She was down on Palm Beach. I moved on her and I failed. I'll admit it. I did try and f**k her. She was married. Nancy [O'Dell]', Trump said in the audio recording. 'I moved on her very heavily. In fact, I took her out furniture shopping.'

He then continued his tirade against Nancy O'Dell by criticising her appearance. As a lot of men like him do when they find themselves rejected. 'I moved on her like a b***h, but I couldn't get there and she was married. Then all of a sudden, I see her, she's now got the big phony t**s and everything, she's totally changed her look', he added.

Billy Bush then chimed in with, 'Sheesh, your girl's hot as s**t. In the purple.' It later became clear in the tape that he was referring to Arianne Zucker, who was stood waiting outside the Access Hollywood bus.

Thankfully, that's where the conversation ended, but not before he had condoned sexual assault and the objectification of women. Billy Bush has since been suspended from the 'Today' show, much to the nation's anger given the fact that Trump - who actually vocalised the worst of the comments - is still being allowed to run to be the nation's leader.