Donald Trump Obama 'October Surprise': What Do The Celebs Think? 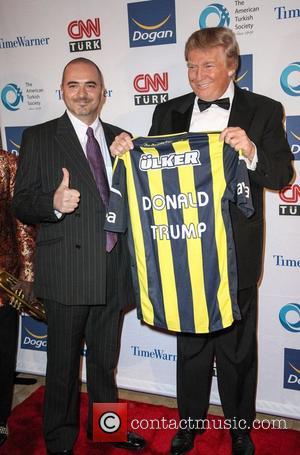 A special Donald Trump announcement, which saw him promise to donate $5 million to Obama's favourite charity if the president released his college records and passport information, has been met by a less than favourable response from a few choice celebrities.

In a rare moment of genuine wit, which would probably be better applied to some of his music, Adam Levine of Maroon 5 tweeted: "Will someone tell Donald Trump we don't live in Gotham City?" And it was the micro blogging site that proved to be a breeding ground for comic responses to the frankly bizarre request from Trump; ‘The Office’ star Rainn Wilson posted, "I will pay 5 million dollars to see copies of Donald Trump's humility," while her show’s creator, Ricky Gervais tweeted, "I will give $500 to charity if Donald Trump gives up his hairdresser's passport and college records." Singer Josh Groban tweeted, "For Halloween I'm going to be Donald Trump! Gonna comb over my hair and not give 5 million dollars to charity!"

Perhaps the most important commentator on Mr. Trump is Obama himself, who of course was the subject of the odd YouTube upload. "What's this thing with Trump and you?" Leno asked on The Tonight Show, reports The L.A Times. "This all dates back to when we were growing up together in Kenya," Obama responded. "We had constant run-ins on the soccer field. He wasn't very good and resented it. When we finally moved to America, I thought it would be over." We at Contact Music will give $5 to our chosen charity if Donald Trump ever says anything sensible. And that’s a promise.