U.s. Presidential Hopeful Donald Trump Has Agreed To Stop Using Aerosmith's Dream On As A Rally Anthem On The Campaign Trail After Receiving A Cease-and-desist Notice From Steven Tyler's Lawyer. 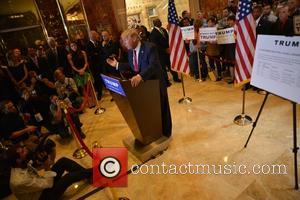 The business tycoon and reality TV star has been friends with frontman Tyler for years, but the singer objected to having his band's 1970s ballad played as Trump's walk out song at political events.

His lawyers fired off a second legal letter to Trump on Saturday (10Oct15), after an August (15) note was ignored, threatening court action if the Republican fails to prove he has the rights to use the track.

The notice, obtained by editors at The Hollywood Reporter, read: "Trump for President does not have our client's permission to use 'Dream On' or any of our client's other music in connection with the Campaign because it gives the false impression that he is connected with or endorses Mr. Trump's presidential bid."

Trump has since responded to the warning, telling TMZ.com he did obtain the right to use Dream On in public assemblies, but will drop the song from his campaign playlist because of his personal friendship with Tyler.

Sources tell the website the rocker only took issue with Trump because he doesn't want his music politicised.

Dream On isn't the song on the Trump campaign trail which has attracted criticism from musicians - Michael Stipe and his former R.E.M. bandmates were not happy with the politician using their apocalyptic anthem It's The End Of The World to push his agenda, while Neil Young previously lashed out at the outspoken candidate after his song Rockin' In the Free World was played as the business mogul announced his bid for the White House in June (15).