While Sean Penn lends this thriller some political subtext, the fact remains that it's actually just another vacuous revenge fantasy from Taken director Pierre Morel. Clearly for Morel, the violence is the point, and any depth of meaning is irrelevant, which leaves the film superficially entertaining but a waste of the considerable talent on-screen. 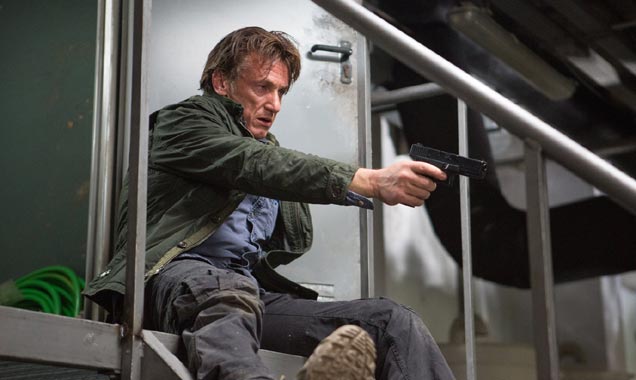 Penn plays Jim, a charity worker in the wartorn 2006 Democratic Republic of Congo. His hot doctor girlfriend Annie (Jasmine Trinca) has no idea that Jim is secretly a black-ops sniper working with fellow mercenary commandos Cox, Felix and DuPont (Rylance, Bardem and Elba). Then their latest mission requires Jim to disappear. Eight years later in an all-new life, Jim discovers that someone is trying to kill him, so he travels to London to find Cox. When Jim's pursuers turn up, Cox sends him to talk to Felix, who now lives in Barcelona with Annie as his wife. With the mysterious killers still on his trail, Jim heads to Gibraltar to tie up the loose ends with DuPont, and finally discovers the truth about what's going on and who's behind it.

Yes, everything is leading to a brutal confrontation inventively set in a bull-fighting ring. But not much else here is either original or convincing. The whole African politics premise is little more than a plot device, while hopping from Congo to Britain to Spain does little more than change the background scenery. Otherwise, the script is so simplistic that it barely holds water, and each ambush, fight and chase sequence feels like something we've seen before. Especially since everything is both over-choreographed and gratuitously grisly. Still, Morel is great at creating a sense of tension that builds ominously from start to finish, adding some gritty urgency through corrupt politicians and self-serving businessmen. Unfortunately, the film continually sidelines these intriguing ideas for more mindlessly violent mayhem.