Montreal electronic artist Doldrums (AKA Airick Woodhead) has unveiled a unique and rather bizarre video for his brand new single 'She Is The Wave' featuring Guy Dallas released this week on Souterrain Transmissions and taken from his upcoming double sided album 'Lesser Evil' due out on February 25th 2013.

The video, directed by Emily Kai Bock (of Grizzly Bear's 'Yet Again' video and Grimes' 'Oblivion') and shot by Evan Prosofsky, shows Doldrums pushing along a shopping cart through a Moroccan desert on top of which a computer set up with a set of speakers is perched precariously. He appears to be struggling to push it before both the set up and Doldrums collapses in the sand. The weirdest twist of the clip comes when he and his cart are rescued by a man (played by John Shevlen) in a car shaped like a cat. It's a bizarre reflection into the creative mind of the artist and the tune attached is not unexpectedly a chaotic confusion with sporadic rhythms and much slower, haunting vocals.

The producer is currently on tour with Purity Ring in Europe and they are set to hit the UK very soon. He has also been favoured by artists such as Portishead, Grimes and Unknown Mortal Orchestra and he has made festival appearances at the likes of SXSW in Texas and The Great Escape in Brighton, UK.

Doldrums - She Is The Wave 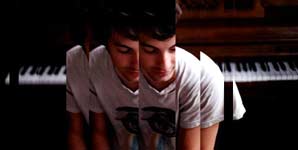