Dog is Dead's new single, Two Devils, is set to be released on March 5th, 2012, through Atlantic Records. Their free EP, Confessions, was released in September 2011 and is still available to download from their website. Dog Is Dead have also announced a headline tour to begin in February 2012.

Dog Is Dead comprise: Robert Milton (lead vocals + guitar/bass); Joss Van Wilder (keyboard); Trev (bass/sax); Paul Roberts (guitar) and Daniel Harvey (drums). 2011 proved to be their most successful yet. Their single Hands Down was the first to be released on Atlantic and it proved to be a success on the radio, being played on XFM; Q Radio; BBC 6Music and BBC Radio 1. In addition, they made their television debut as themselves on the popular teen drama Skins.

Two Devils was recorded at RAK Studios in London; fans may have heard its premiere on the Bombay Bicycle Club tour. The latter band has also remixed the single. Dog Is Dead's debut album will be released in the Spring of 2012 and was produced with the help of David Kosten, who has worked with Bat For Lashes and Everything Everything. 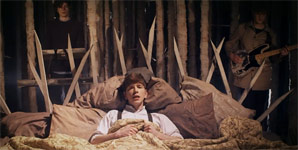