Tennant Ready To Be A Dad 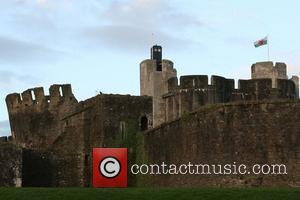 Picture: A TARDIS on the tower of Caerphilly Castle to promote the new series of 'Doctor Who' Caerphilly, Wales - 17.12.09

Doctor Who star David Tennant is hoping to start a family in the New Year (10) - because he doesn't want to miss out on parenthood.
The actor is currently dating 24-year-old actress Georgia Moffett, who is the daughter of former Doctor Who star Peter Davison, and admits he is ready to settle down with her and become a dad.
He says, "It feels an important thing to do and I'd hate to miss out on it. I'm only 38 but my parents had had three kids by this age and I have had none yet."
Tennant also paid an emotional tribute to his mum Helen, who died of cancer in 2007, insisting he hopes he can be a good a parent as she was.
He adds, "My mum's gone now but I feel very fortunate to have had the upbringing that I had and to have had the family around me that I've had."