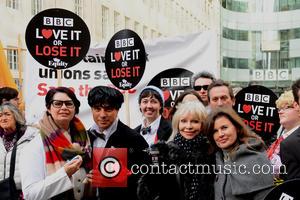 Doctor Who star Billie Piper has banned her actor husband Laurence Fox from watching the hit British TV show - because she can't stand seeing herself onscreen.
The 25-year-old actress left the sci-fi series in 2006, but is set to reprise her role as the Timelord's sidekick Rose later this year (08).
And Piper admits she won't let her new husband watch any of the programmes - in case he chances upon an episode with her in it.
She says, "He has never seen an episode of Doctor Who with me in it because I won't let him.
"I get really edgy watching myself, and I get even more edgy with my loved ones because they know me and I feel they're going to take the mickey (make fun of me).
"Sitting down to watch my performances makes me cry. It's even worse watching it with another actor, because he can dissect your performance."
Piper and Fox married on New Year's Eve (07) and are expecting their first child together.