'Doctor Who' has made history by becoming the first British TV show ever to feature on The Front cover of US magazine Entertainment Weekly. 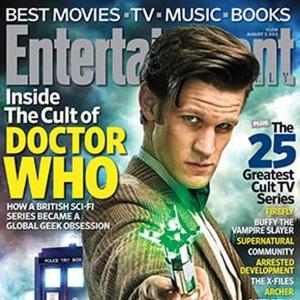 'Doctor Who' is the first British TV show to feature on The Front cover of Entertainment Weekly.

Matt Smith - who portrays the Time Lord in the BBC One program - is pictured on the front of the magazine in front of the TARDIS, and scriptwriter Steven Moffat insists the show is no longer considered to be a ''British import''.

Speaking in the latest issue of Entertainment Weekly - which is released tomorrow (27.07.12) - he said: ''It's not an obscure show anymore. It's not even 'a British import' - it's just 'Doctor Who'.

''Everyone who works at 'Doctor Who' now is a devotee, somebody who grew up loving it. We regard it as a sacred trust.''

The show has even attracted praise from 'Grey's Anatomy' creator and showrunner Shonda Rhimes, who admits she would love to build a TARDIS in her home.

She explained: ''I keep trying to figure out a way of building a TARDIS in my house, and live in it.''

'Doctor Who's prominence in the US has gradually increased, and the show's latest series, season six, became the most watched series ever on BBC America, while the same episodes made the program the most downloaded show on US iTunes last year.