We never expected that from the BBC sci-fi series.

The first teaser for the upcoming 'Doctor Who' Christmas Special dropped on Friday during BBC's Children In Need broadcast. It's been almost a year since we last saw the show; season 10 is yet to arrive on our screens so our next instalment - 'The Return of Doctor Mysterio' - is a kind of continuation from the 2015 Christmas episode. 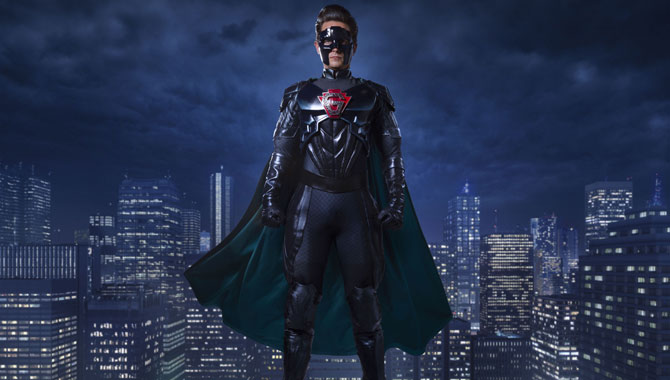 The Return of Doctor Mysterio features a new hero

The episode appears to continue off from last year's Christmas special 'The Husbands of River Song' and early indications show that we could see the return of the humanoid race the Shoal of the Winter Harmony, as well as River Song's faithful employee Nardole, played by Matt Lucas.

The trailer opens with a group of people in scrubs and surgical masks dragging a terrified man into a circular room full of jars of brains. One of them, from what we can see of his face, has a diagonal scar across his forehead, just like the Shoal of the Winter Harmony from the 2015 Christmas Special who are able to remove part of their heads and place things inside.

Meanwhile, a sushi-guzzling Doctor (Peter Capaldi, still) and his friend Lucy Fletcher, reporter for the Daily Chronicle, spy on a suspicious looking man locking up some kind of vault, before examining a map of research centres for 'Harmony Shoal: Science Research Associates' where they apparently are. They are joined by Matt Lucas as the Doctor's newest ally Nardole, who keen 'Doctor Who' fans will also remember from 'The Husbands of River Song'.

Soon they are cornered by another scarred-face man, but almost immediately rescued by an American superhero. Yep, you read that right. It's like 'Doctor Who' meets 'Superman'. According to Lucy, he's a masked vigilante known only as The Ghost with super-strength, the ability to fly and the ability to repel bullets. 'Please understand it's against my personal code to cause lasting harm to any individual. However, light to moderate injury's fine', he says as he takes down their adversary.

In this new episode we may also expect an introduction to Bill Potts, played by Pearl Mackie, who Steven Moffat revealed earlier this year would be the Doctor's next companion following the departure of Jenna Coleman as Clara Oswald.