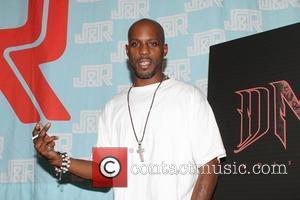 Embattled rapper DMX has scrapped plans to appear on America's The Wendy Williams Show following his Monday night (04Nov13) arrest after missing five different flights producers had booked for him so he could feature on Wednesday's (06Nov13) episode.

The Party Up (Up In Here) hitmaker, real name Earl Simmons, was scheduled to sit down for an interview with Williams on Tuesday (05Nov13), but the New York-based gig had to be postponed by 24 hours following his arrest in South Carolina.

He was freed on bail hours after he was booked for charges of driving on a suspended licence, driving without insurance, and driving an unlicensed vehicle, but he reportedly kept changing his mind about travelling to Manhattan for the show and repeatedly snubbed the plane and car arrangements that had been made for him.

Williams claims he then demanded Tv executives cover the costs for a former lover to fly to the Big Apple too from her home in Florida - but that plan fell through as well and he never made it onto a plane.

Explaining the drama on Wednesday's show, she said, "We made not one, two, three, four, (but) five plane reservations for that man to come up here from South Carolina and he missed all five flights...

"And then he's got this baby's mother. He's got 13 kids... One of the baby's mothers lives in Florida with one of his kids. Well X said he wasn't coming to New York unless we now, all of a sudden, fly his baby's mother up here so that I guess they can have a visitation backstage."

She added, "I like Dmx... We were accommodating, we bought the plane tickets for the baby's mother, she missed the flight... and showed up at the airport randomly the next day to get on the plane. No telephone call, nothing, like she could just use the (previous day's) tickets or something..."

She then gave him until Friday (08Nov13) to honour the commitment - but it appears Dmx has other plans.

A statement released by his representative early on Wednesday reads: "Due to recent media scrutiny, Dmx will not be appearing on The Wendy Williams Show this week. The team apologises to his fans who were anticipating his performance but we are holding off on interviews and focusing on making music and organising a world tour."