London-born DJ Adam J has teamed up with Nightcrasher Records and British vocalist Master Shortie to produce his first track We Came To Party released on May 14th. The club track is set to storm through Dubai's infamous nightlife - a country in which DJ Adam J spends a lot of his time in his pursuit of becoming the biggest DJ on the club scene.

The video for the track gives a taster of what is yet to come this summer - an intense season of clubbing and generally having a good time in Dubai and the UK alike! Infused with the dance-inciting vocals of Master Shortie, this urban floorfiller ticks all the boxes to deliver an elevating tune reaching out to all the serious clubbers out there.

Adam J has previously worked with artists such as Akon, Tinie Tempah, Shaggy, N-Dubz, Jay Sean and Faith Evans, and performed at clubs, bars, concerts, radio stations and even celebrity birthday parties. Already he has DJ'd his way into all the big DJ magazines and earned several awards including the Time Out Dubai Night Life Award for Best Urban Night in 2010 and 2011. There is clearly no doubt that Adam J will achieve further popularity with We Came To Party! 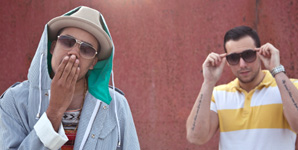