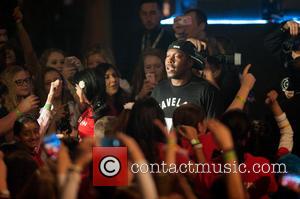 Dizzee Rascal was determined not to let a fight ruin his gig in Cornwall, England over the weekend (21-22Jun14), insisting he felt compelled to break up the brawl and keep the peace.

The rapper performed at the Eden Project venue on Saturday night (21Jun14), and subsequent reports suggested the show was marred by an altercation in the crowd, which prompted the security team to step in and attempt to remove the offenders.

Dizzee Rascal has now confirmed the incident and revealed he asked the guards to allow the two men stay.

Speaking ahead of his performance at the Isle of MTV event in Malta, he explained, "I'm so used to doing it (breaking up fights). I just didn't want them to get kicked out. I'm used to fights - people get a bit carried away, jumping around. It gets a bit emotional and you just have to separate them."