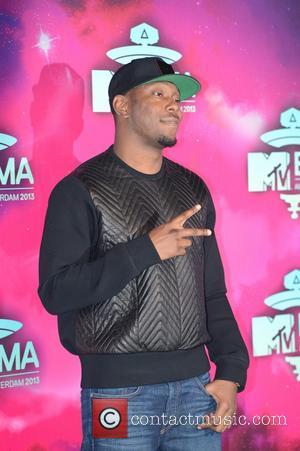 British rapper Dizzee Rascal has attempted to make amends with enraged Justin Bieber fans after he falsely announced the pop star as the winner of a prize at the MTV European Music Awards on Sunday (10Nov13).

The Bonkers hitmaker attended the red carpet pre-show event before the awards ceremony began in Amsterdam, Netherlands to announce the Biggest Fan Base In The World prize.

However, before honouring Tokio Hotel as the rightful winners, the star jokingly announced Bieber as the victor.

He said, "And the winner is Justin Bieber. Just kidding, it's Tokio Hotel."

Dedicated fans of the Boyfriend singer later took to Twitter.com to share their frustrations, with one writing, "Excuse me! That joke bout the EMA Biggest Fans winner was absolutely preposterous and insulting," and another adding, "That was not cool what u (sic) did on the red carpet about Justin and the award im a belieber (sic) and I'm pi***d off no longer a fan of u (sic)."

The rapper has now taken to the social networking site to clarify his comment, writing, "I think I upset a few Justin Bieber fans last night, I was only joking kids."