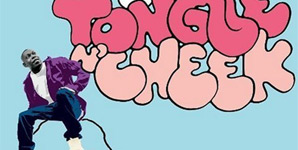 As I write this Tongue n Cheek is already gold-selling. Just like Maths n English, Showtime, and 2003's Mercury Prize winner Boy in da Corner. That's every album he's ever released. So, say what you want about Dylan Kwabena Mills, but he's definitely come a long way from getting kicked out of high school for the fourth time.

There's certainly nothing new about Dizzee Rascal's rags-to-riches ascent to superstardom -in fact you could write the autobiography with your eyes closed. Young talent from a troubled background, plucked from obscurity. He becomes an overnight success, makes money, and the inevitable 'sell-out' backlash ensues. But what makes Dizzee Rascal unique is the genuine sense you get that none of this circus bothers him much. Most Hip-Hop artists in his position would be inflating their status to the point of ridiculousness, threatening anyone who dares to challenge them. Dizzee's nonchalance on this topic is more than a little refreshing, see Road Rage: 'Now I'm legit I just couldn't give a rat's arse.'

So, the sense of humour bypass hasn't happened - at least not just yet. As the title would suggest, there are no cagey, Jay-Z style assertions of greatness on Tongue n Cheek. Instead, he delivers what he always said he intended to - enjoyable party tunes by the truckload, skewed with his razor-sharp observations about the position of wealth and privileged he now find himself in.

The first three tracks of Tongue n Cheek are thoroughbred winners. Armen van Helden's production on opening track 'Bonkers' is as near to perfection as it comes, coupled with the darkly comic lyrics, with which he presents himself as a caricature: 'all I care about is sex and violence/a heavy bass line is my kind of silence.' I defy you to find a track that fills a dance floor quicker. Next, the bratty assertions of 'Road Rage' are a spot on mix with the dance hall beat of its backing track. Dizzee is in full carefree flow 'beep beep/coming through/move over/yeah you,' and unapologetic 'if I get caught I don't care, I'm minted!' Of course, he's shallower than before and his focus has shifted from grittier concerns of his earlier records to partying, sex - generally the things that concern a 24 year old millionaire. The pop genius of the smash 'Dance Wiv Me' is a tamer example of Dizzee's love for the laydeez, but there's no mistaking that it gets more graphic next door on 'Freaky Freaky.' With a charming exclamation of 'just know I bag it before I shag it,' alongside graphic descriptions of what various girls do to his 'banana,' I imagine that it may offend the hardcore feminists. It's a tender issue, this gender politics, but regardless of what you think of his viewpoint there's a transparency to Dizzee's attitude that's admirable. He's actually not one to band around words like 'slut' or 'bitch' in reference to women and his attitude towards sex boils down to this fact - like it or not, he appreciates what he gets.

Not to say that Tongue n Cheek doesn't toe the line between the sublime and the ridiculous at times. There are a couple of filler tunes, 'Chillin wiv va man dem' is neither here nor there, after all relaxed has never been Dizzee's forte. Marketed summer smash 'Holiday' is pure comedy, the chorus sounds like a Saturday night games show jingle and the tacked on rave breakdown of the end almost parody. But then, people bought it didn't they? I'm clearly in the wrong business.

No one is better at doing what he does than Dizzee Rascal. Tongue n Cheek might be the last of his grittiness floating out of sight down the river, but he's got enough talent to sustain whatever he does next. Provided he keeps his wit(s) about him.