During their gig in Cincinnati last week, the country music trio displayed a poster of Trump adorned with devil horns during 'Goodbye Earl'.

After the torrid time they endured for getting involved with politics a decade ago, it seems that the Dixie Chicks are still unafraid of courting controversy, this time by sticking it to Donald Trump by displaying an image of a defaced poster during a concert.

During their gig in Cincinnati on Wednesday night (June 6th), the opening night of their first North American tour in nearly ten years, the country-pop trio projected a poster of the controversial Trump, who is all but set to be named as the Republican Party’s presidential candidate, with his face adorned with devil horns, goatee and moustache.

The Texan group – consisting of Natalie Maines, Martie Maguire and Emily Robison – displayed the poster during their performance of ‘Goodbye Earl’, a song about a woman who kills her abusive husband.

Also part of the stage set was a collage of caricatured images from politics, including Trump’s defeated presidential rival Ted Cruz.

Maines, the group’s consistently outspoken lead singer, has criticised Trump on a number of occasions before, tweeting back in January this year: “As long as Donald Trump’s decisions for America are as solid as his decision about his hair, we’re in good shape.”

The incident, which occurs as the Dixie Chicks kick off their MMXVI tour, recalls the infamous occasion in 2003 when, at a gig in London, Maines told the crowd: “Just so you know, we’re ashamed the president of the United States is from Texas”. 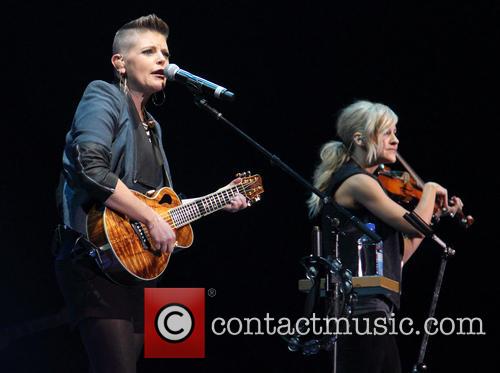 The trio experienced a massive boycott of their music from fans and radio stations in the aftermath of the comment, which nearly finished their career. However, three years after that, they returned to the top of the charts with their biggest hit so far, ‘Not Ready to Make Nice’.

“I apologized for disrespecting the office of the President,” Maines said in 2006, “but I don't feel that way anymore. I don't feel he is owed any respect whatsoever.”