Dita Von Teese believes she is very similar to ex-husband Marilyn Manson because they both completely reinvented themselves. 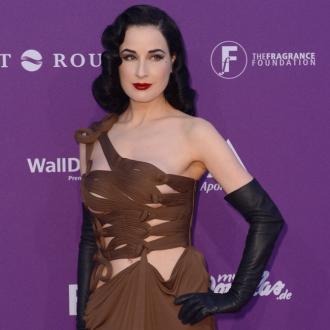 Dita Von Teese was ''cut from the same cloth'' as Marilyn Manson.

The burlesque dancer related to the goth rocker because they both created a new persona for the sake of their art and even though they divorced in 2007, she has never felt so akin to anyone since.

Dita said: ''We were cut from the same cloth. We both changed out entire identity, coloured out hair black, did our own man-up and came up with our own outfits - that's why it worked so well.

''We could relate to each other in a very profound way.''

The sultry star - who likes to refer to herself as a ''stripper'' - can't understand why men find her striking looks so intimidating and regrets she can't be herself in front of most people and has to constantly put on an act.

Dita told g2 magazine: ''When people say I look intimidating, it's hard for me to relate to. I hear that a lot. I don't know why. People say: 'Oh, you're too intimidating, everyone's afraid to ask you out on a date.' Which is unfortunate because I'm pretty shy.

''Sometimes I can't be myself, because I'm just from a small town in Michigan, my hair's naturally bond - this is all something I made up!''