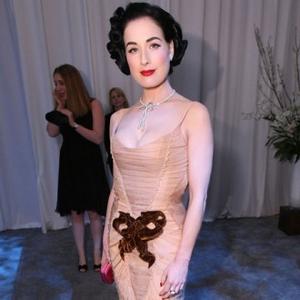 Dita Von Teese would rather be a "racy" burlesque dancer than star in her own sex tape.

She said: "When they go to the movies, people want to see a little nudity. With burlesque, I show what I want to show. It's not related to my real sex life at all. It's like make-up, body make-up, spotlights, rhinestones, feathers. It's sensual, but nothing close to the real sex. And meanwhile, I'm considered racy. But I'm in control as a woman. Is it when you're out of control, and your sex tape comes out, and you're like 'Whoa, whoa, I didn't mean it, I'm apologising' [that you're accepted]? I think maybe because I am giving it to people in a way, and I'm not apologising, there's this whole thing."

The 38-year-old beauty - who was previously married to Marilyn Manson - finds it surprising that many people consider burlesque to be a "risque" form of entertainment.

She added in an interview with WWD: "When I think about my idols of burlesque and America in the 30s and 40s, when Gypsy Rose Lee was a household name as a stripper, it's kind of surprising to me that it's 2010, and I'm still considered risque. There's this whole big burlesque movement that's about to happen. I keep reading about all of these movies coming out and quotes from people saying, 'We don't take off our clothes - we're classy. It's like burlesque without the strip.' And I'm like what are you talking about? There is no burlesque without the strip. The trick is can you be classy, sophisticated, elegant and take off your clothes? That's my goal, to show it can be elegant and beautiful and sophisticated, rather than dumbing it down and commercialising it for the masses."