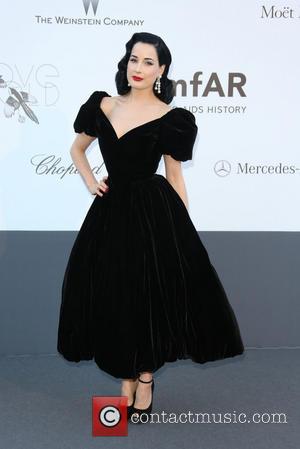 Dita Von Teese has paid tribute to fellow burlesque performer Sparkly Devil after she was killed in a car crash in California on Sunday (26May13).

The 36 year old, real name Sarah Klein, died in Burlingame after the vehicle she was driving in collided with a party bus, leaving 10 people injured, including her husband, Raul Padilla, who remains hospitalised in critical condition.

Jim Sweeney, owner of Hubba Hubba Revue, where Klein was set to perform on Thursday (30May13), tells the San Francisco Chronicle, "She was probably one of the greatest comedic burlesque performers I've ever seen, but she could also transition into classic burlesque (and) become this other glamorous person. She was by far one of the most respected and beloved people in our community."

And now Von Teese has taken to Twitter.com to pay her respects to the tragic star, writing, "Condolences to the family & many friends of much loved burlesque performer @sparklydevil."