Fans of 'Up', prepare for the most adorable video you'll see all week. In a hidden camera stunt, Disney Pixar have let loose a friendly Golden Retriever in the park to talk to people who are enjoying a day out in the sun. Yes, talk. 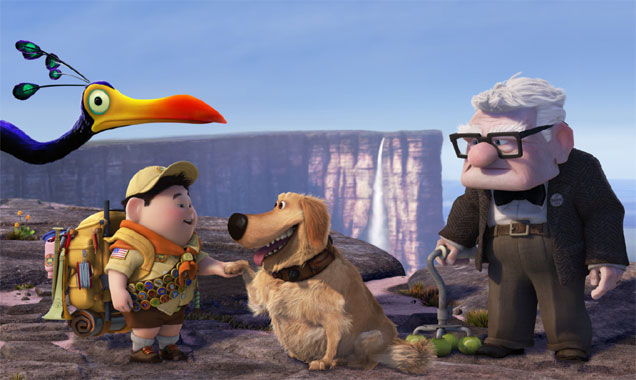 It's the real life talking dog, Dug. And he's 'on a mission to meet new friends' according to the video, which sees a real dog approach several adults and children wearing a collar that feeds Oscar nominated actor Bob Peterson's (the guy who voiced Dug in 'Up') voice through a speaker on the device. As he tells one curious little girl, 'I may talk because my collar allows me to talk'.

In all honesty, nobody seemed THAT disturbed about being accosted by a talking dog as they chilled out in the park, picnicking and playing ball. They all seemed willing to give him a good scratching session though and play a quick game of fetch. He even used Dug's catchphrases from the movie including 'Squirrel!' and 'I do not like the Cone of Shame'.

'Up' was released in 2009 and was co-directed and written by Peterson alongside Pete Docter. The film follows a bitter and bereaved 78-year-old man called Carl Fredricksen who attaches thousands of helium balloons to his house, uprooting it as he begins his journey to a new life in Paradise Falls. However, he accidentally ends up taking a young boy scout with him, who had been on the doorstep before lift off. Dug is the dog they meet when they crash the house into a mountain during a thunderstorm. The movie won two Academy Awards for Best Achievement in Music Written for Motion Pictures and Best Animated Feature Film of the Year.

More: Watch the trailer for 'Up'

The hilarious video has had over 50K views since it was uploaded yesterday (October 6th 2016). Though it's not made clear exactly how the stunt has been set up, one would imagine that there are hidden cameras around the park and microphones hooked up to them. Asked where his owner is by one woman, he replies: 'My master? He is on a plinthe with a small mail man.'

It's all part of a new digital series called Disney IRL (in real life), so stay tuned for more viral adventures.