Cher believes her forthcoming musical movie 'Burlesque' is like a gay version of Disney movie 'Fantasia'. 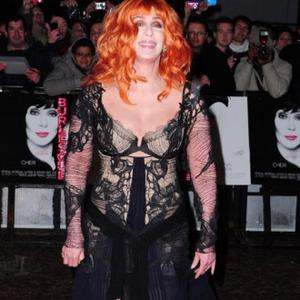 Cher thinks 'Burlesque' is like a gay version of Disney movie 'Fantasia'.

The 64-year-old Oscar-winner - who plays club owner Tess in the movie opposite Christina Aguilera and Kristin Bell - believes the film, which features a large number of song-and-dance routines, is similar to 1940 animated musical classic 'Fantasia' in its epic feel, particularly for her large gay following.

Speaking at the UK premiere of the movie at the Empire cinema on London's Leicester Square, Cher told BANG Showbiz: "Someone said this film is like gay fantasia. It's a gay fantasia!"

Discussing why she took the role in the film, her first major feature since 1999's 'Tea With Mussolini', the legendary star joked it is not like a Shakespeare project but seemed like a fun script that gave her the opportunity to display her vocal talents.

She said: "Well it wasn't Shakespeare! But it had a great feeling to it. It was just fun. It was a lot of fun. And I wanted to sing. That was my main reason for taking it.

Working with Christina was a "little shaky" to start with, she added, but the 29-year-old beauty managed to pull off a "great" performance, with the two even sharing a special Bond.

She added: "How was Christina? Great! She was a little bit shaky but very hard working. She was very much a professional and we got along good and you know if you have chemistry with someone it makes acting easier."