Review of Settle Album by Disclosure

It's easy to say what the Lawrences/Disclosure aren't: Saviours of British dance music? Nah. Innovators (said snidey style)? That's a negative. Charismatic divas with star complexes the size of Saturn? That'll be a no. 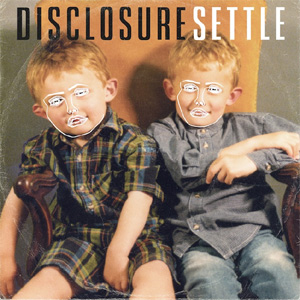 Too much expectation was placed on siblings Guy & Howard - or onto Disclosure, the vehicle which they use to bring us their music - well before Settle was released. Probably the most fantastical was that the unassuming duo were going to take the (supposed) corpse of electronic pop and somehow form a vanguard, then return the nation to the early noughties apex of big clubs and superstar DJ culture.

Absurd, of course. The rock press have had a field day though as a result, mistaking Settle's refreshed take on UK garage and/or two-step as some kind of shameless grave robbing; a backwards and unnecessary nod to the Artful Dodger and (shudder) Craig David. If this proves anything, it's that most of them simply haven't listened properly, or they're frustrated that the guitar continues to fight a miserable rear-guard action as a contemporary musical instrument with every band sounding like descendants of the Beatles or The Stones, or both.

For those with more open minds, Settle offers the kind of rewards that, for example, the bombastic, Jamaican-influenced tones of Major Lazer do not; there's no dirrrrty bass here, no dancehall menace. It's orthodox so much as that its creators prefer to sit behind their twiddling knobs with a range of collaborators adding the flavour and depth to it that otherwise the accusations of clever clever banality would be arguably true.

You'd have to have been deaf not to have caught up with Latch, on which voice for hire Sam Smith croons, wails and moans over a pitch perfect set of beats that mould past and present together with an eloquence last heard on Sam Sparro's Black And Gold. Whether aiming for resurrection or not, this early rush would normally signify the no way back point for most albums; the Lawrences, however, are far from done with us yet.

As well as their apparent hallmarks - a minimalist attitude to programming, pristine lines and a deft sense of no breakee no fixee convention - the choice of collaborators is just as astute. There are no pick and mix indie big time folk here toying with a solo project outline, instead the "Team" are all tellingly hungry and some way from the red carpet. This comes with the possible exception of Jessie Ware, of whom you can blame/applaud for kick starting the whole thing via the brothers' early remix of Running. Her turn here on Confess To Me is as tough as anything else going, and not for the first time proves the maxim that artists mugging it up the ladder can still work more urban material well should they want to. Jamie Woon may be around for A.N.Other reason following the yawning gap since Mirrorwriting, but even though you suspect the duo are doing him a favour more than the other way round, January still works and sounds probably more lucidly 2013 than he'd like. The appearance of Friendly Fires Ed Macfarlane is a little more predictable, but whilst he fails to make Defeated his own, it's yet another bullseye, spunky r&b plus with a little disco flourish to taste.

Still almost certainly laughing at the irony of Daft Punk being lionised for jumping into the wayback machine, there are moments when the formula feels just that; both Grab Her and Stimulation are straight up bangers which lack some of the finesse and good humour of their compatriots. The final words, however, are those of the much feted London Grammar - although Aluna George's White Noise is zappy, sure footed pop - who, via their classically adapted brio, craft Help Me Lose My Mind into something which sounds ready for Asda mums and their snotty pre-teens alike.

The world isn't ending, and we don't therefore need music which has to move mountains. Settle has the rare quality of observing its boundaries impeccably, and the result is that what it creates inside them is almost universally wonderful.