Squarepusher has a lot to answer for. In the mid 90's, he made subtle, arty dance music a force to be reckoned with, "Feed Me Weird Things" demonstrating to the world that dance music didn't have to be all hollow bravado and posturing. Trouble is, nobody seems to have told Disclosure that not everyone can pull this style of music off - and they fail to pull it off quite spectacularly on this single. 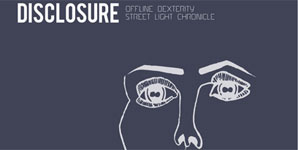 Offline Dexterity is a drab, uninspiring snoozefest that does absolutely nothing to capture the attention of the listener whatsoever; Dull, uninteresting pads repeat on and on over a beat that would have trouble fighting its way out of a wet paper bag with a stanley knife, and the whole thing drivels on for 5 minutes before just... stopping. No big ending, it just stops, leaving the listener to simply forget everything about it within moments - which is probably best, considering. Of course, I appreciate that music is relative and I might simply not "get it", but unless you're particularly keen on listening to what sounds like a CD that's skipping on one section of a track for 5 minutes, I can't possibly comprehend how you might enjoy this.

Streetlight Chronicle fares a little better than the opener: It's still bland, overegged electronic music that doesn't do anything, but this track at least does a slightly better job of ripping off Squarepusher. They've remembered basslines for one; and while it's a nicely complicated one that Tom Jenkinson wouldn't be afraid to drop on one of his albums, the entire song is built around it, and it soon becomes as dull as the rest of the contents of this disc. The whole thing does nothing to reward the listener, and after ten minutes I'm frankly glad that it's over. My long suffering girlfriend, pottering about the house while I had this on, turned to ask me if it was ever going to start - and refused to believe me when I told her the first track had finished.

I'm trying to find something positive to say about this disc, but other than the fact that it's been an exercise in how many negative verbs I know, frankly, I can't. It's the first CD I've received to review that I've considered binning afterwards, because I can say with some certainty that I never, ever want to hear it again.