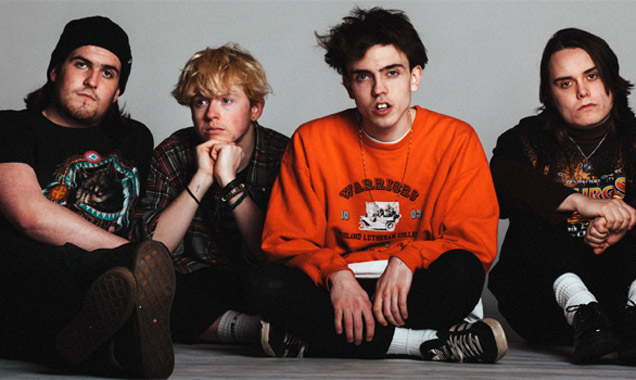 Upon seeing the video for Dinosaur Pile-Up's latest single Derail, it was clear that Matt Bigland's gang from Leeds were going to be making an obvious lunge towards the mainstream. The video itself has high production values and the song is a mid-paced rich sounding melodic rock song that would not have sounded out of place amongst any of the singles that Feeder have put out in the past decade. Dinosaur Pile-Up have always worn their influences quite readily upon their sleeve so you could say that this is more like their Colour and Shape than their Pinkerton, but Nature Nurture is not quite the huge leap in sound that Derail suggests. 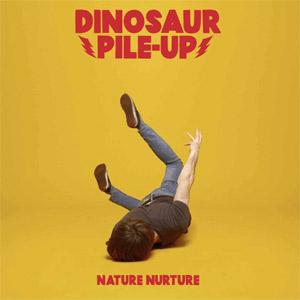 What Nature Nurture mostly trades on is those big, summery power pop songs that they have thus far made their name in peddling. The opening song, Arizona Waiting, sets proceedings off in fine form with a huge wall of power chords and a bouncing pop punk riff that Jimmy Eat World would be proud to call one of their own. Elsewhere is the snarling hard rock assault of Heather, the very Weezer-esque White T-shirt and Jeans and the brilliant hooky fun of Peninsula. Dinosaur Pile-Up have always been great at writing these big dumb anthems so it is no surprise that these new songs come off so well. There is a notable sheen applied to the ragged edge displayed on their debut, Growing Pains.

Elsewhere on the album, Dinosaur Pile-Up move away from their tried and tested formula with thrilling results. The previously mentioned Derail could well be their first proper classic tune and The Way We Came adds acoustic guitars into a more sombre take on their usual fare. Closer to home, Lip Hook Kiss adds a layer of hissing synths and Nature Nurture - the title track - is the only song which exceeds four minutes, utilising a steady, pounding sledgehammer riff. Epic stuff.

Be it because of their dramatic inter-band tension (two of the three members left before completion of the album) or their explosive rock sound, Dinosaur Pile-Up have established themselves as one of the most interesting and exciting young British bands in a long time. On this, their debut album Growing Pains, the trio cut loose and justify all of the hype they've been receiving. 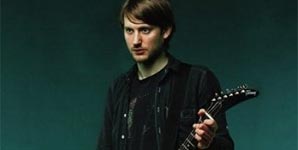 The last few months have been trying times for Leeds grunge revivalists Dinosaur Pile-Up, with the departure and replacement of two thirds of the band. Their new single, Birds and Planes, does not seem fazed by the state of upheaval within the band however; it is another glorious slice of spiky rock music: business as usual then. 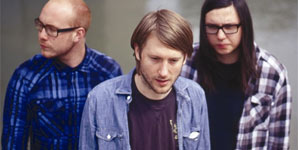 Dinosaur Pile-Up, The Most Powerful EP In The Universe EP Review

Review of Dinosaur Pile-Up's EP The Most Powerful EP In The Universe released through Friends Vs Records. 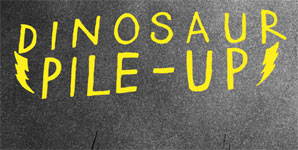 Continue reading: Dinosaur Pile-Up, The Most Powerful EP In The Universe EP Review 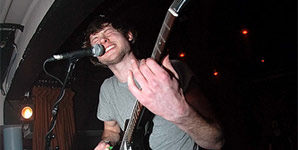 Leeds three-piece Dinosaur Pile-Up are just the latest in the city's never-ending conveyor belt of new talent that seems to throw up at least one new and unshakeably exciting musical ensemble every other week.

Formed from the ashes of several other bands, Dinosaur Pile-Up have been creating a buzz for the best part of 2008 thanks to their incendiary live performances while debut single 'My Rock'n'Roll'/'Love Is A Boat And We're Sinking' has been showered in nothing but praise way before its actual release in the early part of December.

Leeds seems to be producing the best guitar bands in the UK at this moment in time. Why would you say that is?
Well, I think Leeds has got some pretty great bands going around right now. It is a great community for bands as a creative kind of whirlpool. Not many cities have that kind of close proximity of venues, bands and promoters that maybe the Hyde Park area of Leeds. It's a kind of hub for a pretty lively music scene now I suppose, so maybe that's having a positive affect on the bands that come out of it... I don't know - maybe it's just a stroke of luck and there's a bunch of people that just know how to riff.

Obviously you have experience of the industry previously with Mother Vulpine. Do you think this has made it smoother for Dinosaur Pile-Up to move forward as a band?
Yeah I think that helps a little - but Mother Vulpine as a band never had a huge amount of industry pressure surrounding it. As a band it had a good buzz around it in its early stages but nothing crazy... I've just always been kind of aware of industry stuff and have held Dinosaur Pile-Up very close to my chest in terms of folk like labels or whatever sniffing around... I think Dinosaur Pile-Up has kind of made its own headroom in terms of press around the band, as there was never much of a link between the two bands. I wanted to leave that behind and let Dinosaur Pile-Up stand on it's own two feet you know?

You've been compared with everyone from Bloc Party to Weezer, The Cribs and Foo Fighters. Do you see this as being complimentary in some ways as your music is hard to pigeonhole or a bit worrying in that people unaware of the band will be more expectant on their first view/listen?
Well I think it's a good thing that people may not have pigeonholed us yet - but people always will and lazy journalism and trends will set in soon enough... I just think it's important that people listen to the band with an open mind, and leave preconceptions at the door. That's hard these days - but the songs are honest and we as the guys are just average dudes. I want people to listen to us as just that. But I'd rather people liked us for sounding like us, rather than kissed our ass for sounding like someone else.

What are the collective influences each member brings to Dinosaur Pile-Up?
Well, Dinosaur Pile-Up works in a funny way as a band. I kind of write most of the songs, so a lot of 90's American stuff is present in the sound, but live we as band bring a lot of our collective characters to the table. We all like to play hard and loud, and we're all in to our 90's bands, heavy Metal bands, and bands that like to 'slay' if you like...

Are you surprised at the amount of attention that you've received over the past few months, not to mention the positive press? 'My Rock'n'Roll' got single of the week in this week's NME for example.
I suppose so, but to be honest I try to kind of not be aware of that stuff too much... I'm not really interested in the press because I'd be doing this anyway even if people weren't writing nice things about us... So I suppose I'm just happy some people like it...

In a similar vein, how much notice do you take of the press and would it concern you if the band were to get a spate of negative column inches in the future?
Well I guess I just answered most of this question already... But just as I'm not so aware of the good press, I'm equally as unaware of the bad press... Sure we've been gunned down a couple of times over how we sound to how we dress - but if I'm going to start worrying about that now, I'm screwed.

Your debut single 'My Rock'n'Roll' and 'Love Is A Boat And We're Sinking' is pretty unique in that both songs stand out massively as anthems (hence the reason its a double a-side I guess!) in their own right. Does it worry you that all subsequent material will be judged against these two songs or are you not that concerned as there's even better material from where they came from?
I guess I'm not so worried about that, because it is what it is... The songs I write are just the songs I write... I like that first single, and I like the second one that's going to come out, and I'm pretty sure I'll like the third... I'm not worried about the future songs that are going to come out, because I suppose I like it, that's why it comes out like that...

What are the future plans for Dinosaur Pile-Up in terms of forthcoming releases, tours and record deals?
Well I think we're going to release our second single sometime around Febuary or March 2009, and the album is loosely being planned for later in the year... Hopefully we'll get on some cool support slot for some upcoming tours too... We're not rushing for any record deals or anything. I don't really want to do that. I believe in this band and the songs and everything, so if something comes around the corner that's good, that's when we'll think about record deals...

What are your plans for Christmas and the New Year?
Going home and seeing my family - this year has been busy! New Years will be a great show at the Faversham in Leeds with some other great bands, and in January we're gonna go play some shows in Holland and Germany which should be killer!

Finally, what would be the definitive dinosaur pile up and which one do you think would come out on top?
Jeez I don't know! The original Dinosaur Pile-Up that inspired the name was a pile of Brontosaurus'. But I reckon if there were a definitive pile-up it would include a Triceratops, a Brontosaurus, and a Tyrannosaurus... The three bigwigs... And I think the T-Rex would end up on top because he's the meanest motherfucker in the valley!