'Glee' actress Dianna Agron is reportedly dating 'Gossip Girl' actor Sebastian Stan and the pair are said to be smitten with each other. 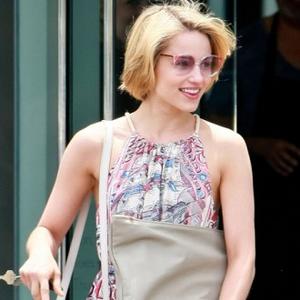 The 'Glee' actress and the 'Gossip Girl' actor - who was in a relationship with Leighton Meester for two years - are said to be smitten with each other and he has already won the approval of her TV co-stars.

A source told Life and Style magazine: "He came to Dianna's 3pm 'Glee' performance at the Staples Center in Los Angeles on May 28. He waited for her backstage. Once the cast finished the show, Dianna ran backstage to Sebastian, and they were all over each other! Dianna and Sebastian love hanging out together. He can definitely hang with the 'Glee' cast."

In April, Dianna was linked to Sebastian's 'Captain America: The First Avenger' co-star Chris Evans after meeting him at a pre-Oscars in February.

An insider said at the time: "Chris' brother Scott is a huge fan of her show, and he particularly loves Dianna. He and his friends like to joke that as long as she stays on the show, the family will welcome her with open arms!"

Dianna split from her 'I Am Number Four' co-star Alex Pettyfer at the beginning of February after dating for less than a year, even though the 25-year-old beauty had recently spoken about their exciting relationship.

She explained: "Alex might see himself as a bad boy, but he's actually very sweet in real life.

"I think it's important to have your differences in any relationship. I wouldn't want to be dating a carbon copy of myself. That would just be boring."